Our final stop in Florence is an off-the-beaten-path attraction that is really not so off the beaten path, and is close to our apartment. It’s the Apothecary of Santa Maria Novella, which has been in continuous operation for about 800 years. Its easy to miss, because its exterior is rather plain and modern, a stark contrast to what awaits inside.

It was initially founded as an apothecary by and for monks,  but when word got out about the healing properties of some of the herbal concoctions, it went public.

Today, it’s more an elite perfumery than an apothecary.

It also makes and sells other (hic!) concoctions.

In a building with its (more or less) original Renaissance detail intact. 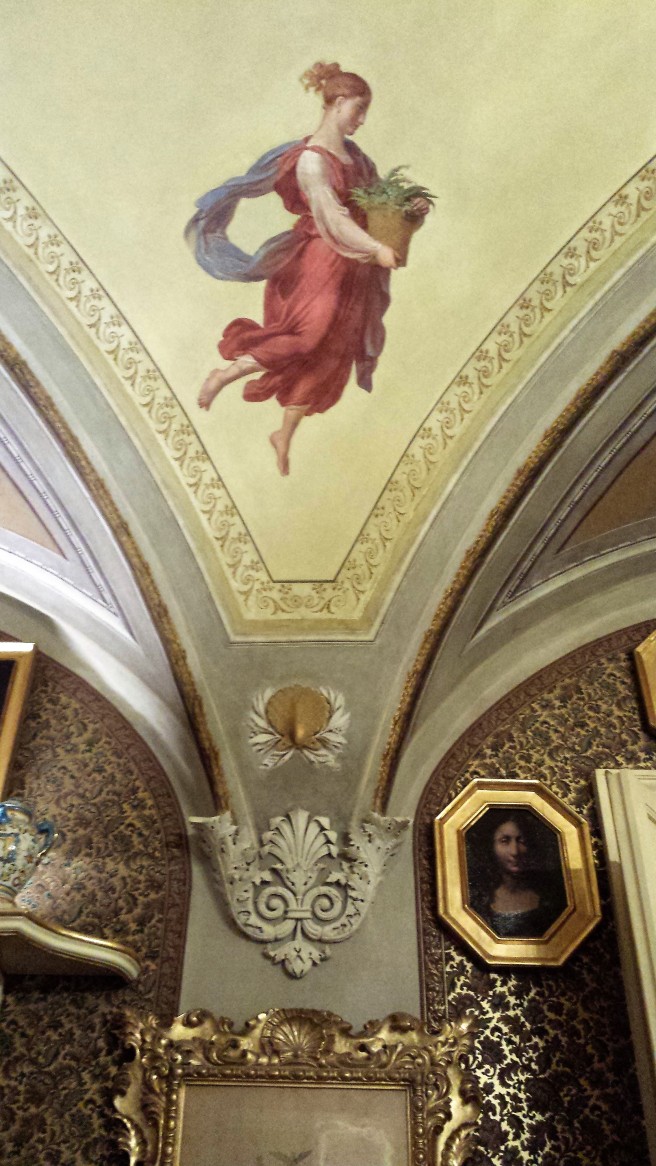 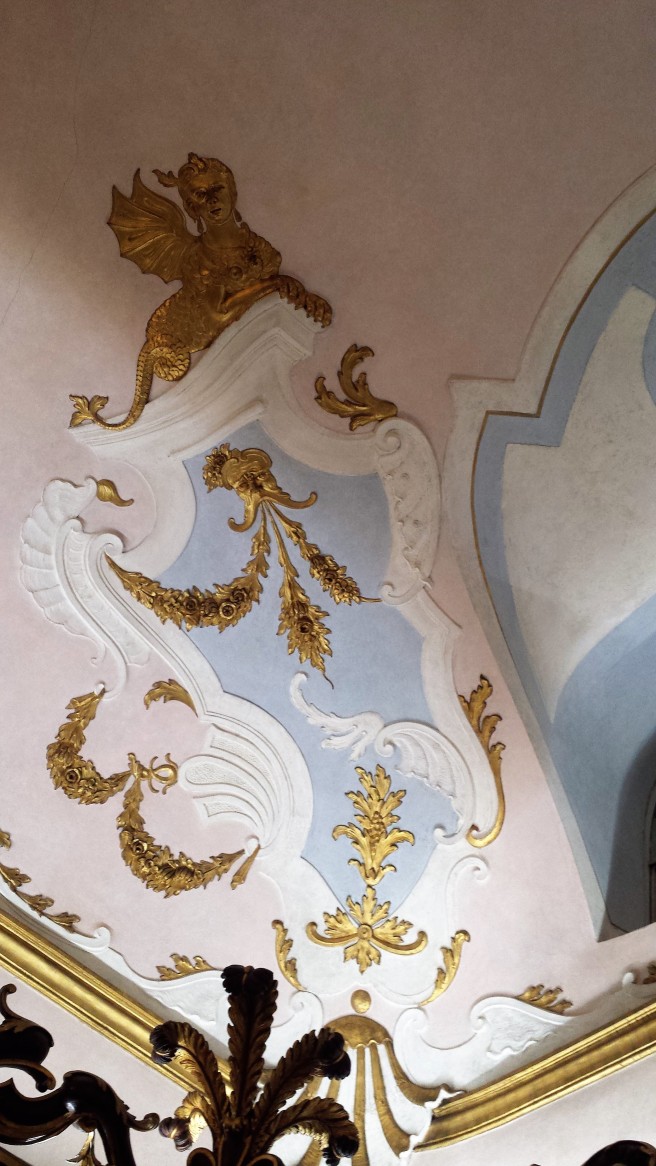 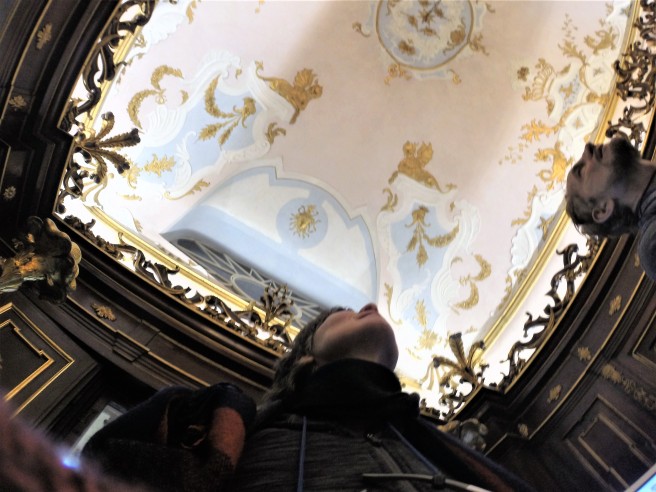 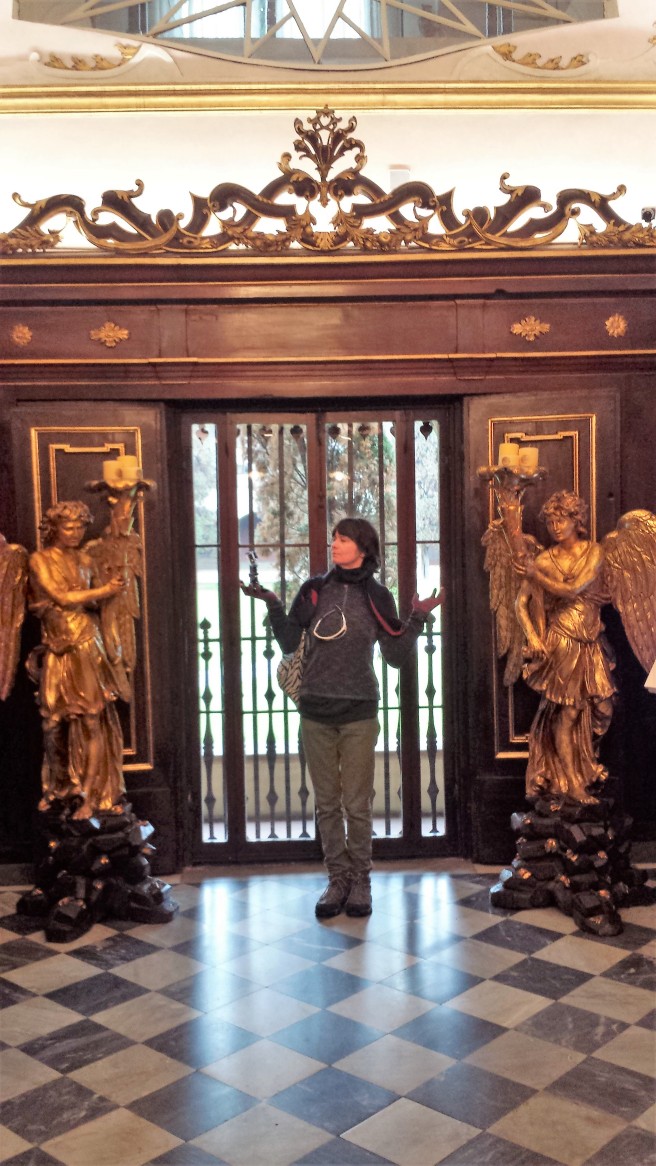 Once we’re done here, we head back “home” to retrieve our stuff and say goodbye to Giulio. He says “it’s been an honor having you”, pronouncing the “h” in honor, but his English is still an ell of a lot better than our Italiano. I tell him that the next time we come, we’re going to insist on hearing a song, and he agrees.

Then it’s on to the train station where we spend some time in a bookstore cafe reminiscent of the sadly defunct Borders; then it’s on to Venice, with lunch self-served along the way. 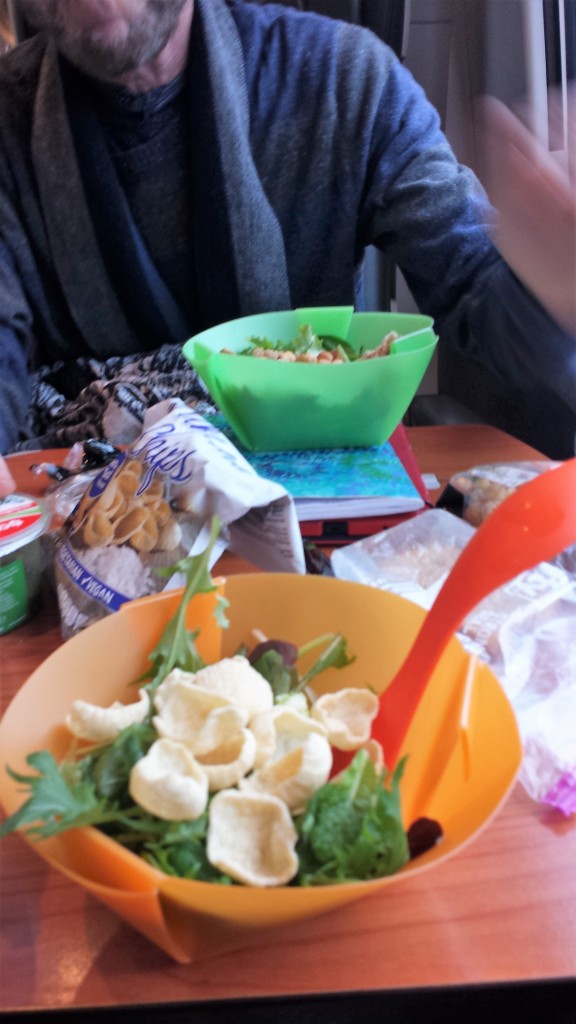 Venice is astronomically expensive — a room via Airbnb cannot be had for less than $100, which is about triple our budget. I shudder to think how much hotels much cost. So we instead arranged a room in the outlying town of Musestre, about 30 minutes by train. After much confusion, we find the proper train, and get off at the Musestre station to walk 20 minutes through the quiet town to our new home. Our hosts had offered to pick us up at the station, but we read on the website that they expect to be tipped for the service, as well as for any meal they offer you. So being cheapskates, we take a hike.

It’s a good thing, because we stumble upon something Kimberly’s been hoping to find: an honest-to-goodness fabric store, the first we’ve seen over here. She’s in hog heaven.

In particular, she’s been hoping to find something to make a new cord for our homemade rucksack thingamajigs. There are several prospects, and she picks out one she likes and asks the shop lady, whose English is very limited, how much it costs. She replies 40 (euro) cents per meter, and shows us a meter stick, which is somewhat like a yardstick, but square instead of flat. She explains that the width is a centimeter, and the length is a meter. Kimberly initially misunderstands, thinking that the price is 40 cents per centimeter, and asks if there is something less expensive. But I catch the error, and she realizes that it’s actually a good deal after all. So she buys it, and all are happy.

The walk to our new digs requires us to go over a bridge with no sidewalk, but there is little traffic, and drivers apparently are accustomed to walkers and cut them plenty of slack.

The home is a house, rather than an apartment, in a middle-class neighborhood. Our theoretical host is a young man named Mattea, but we already know that he is seldom here, and that it’s actually his parents’ home. They’re a 60ish couple who speak no English at all, but are adept at using a translator app on their phones. They greet us with bottles of water and show us to our room. 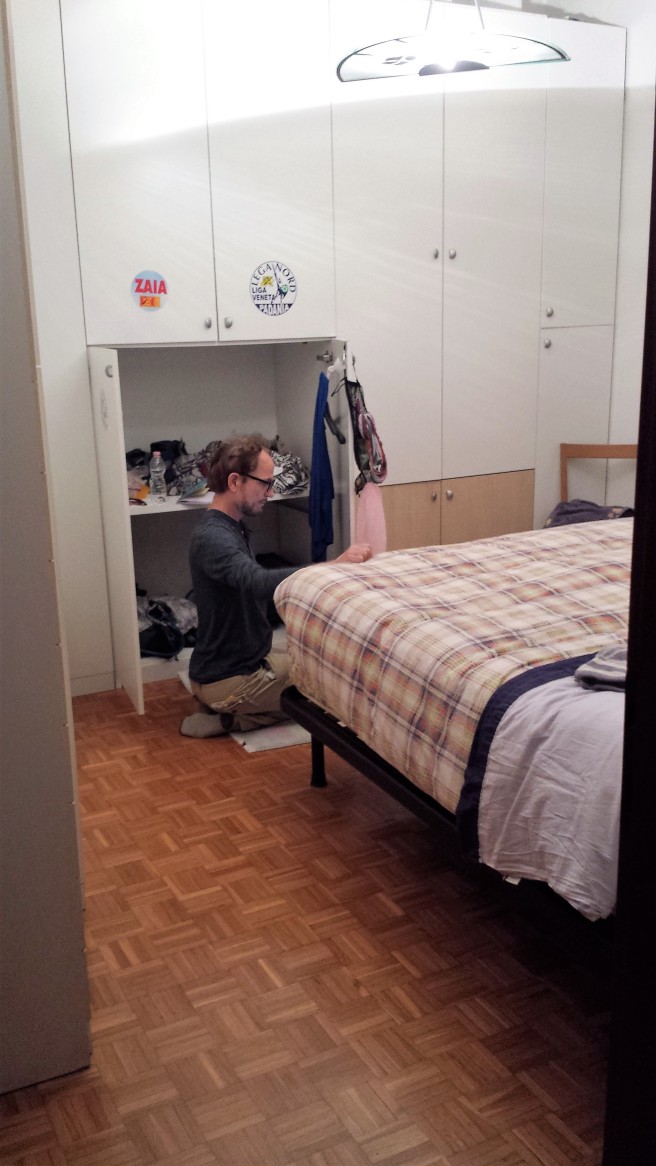 Sure enough, we see a box for tips above the bed, along with a note suggesting that we leave money if we’ve been given a ride or a meal. When we see them in the large, well-equipped kitchen, they show us a message on the phone saying “Would you like to have a pasta with us tonight?” We politely decline, explaining that we’re vegetarians and already have our food (though in truth we don’t have a lot because the market on the way was closed). They seem understanding and even give us some radicchio to include in our salad. Hopefully, any tip they expect for this would be just a few pennies so they won’t miss it when they don’t get it.

In the bathroom is posted another message in English, urging guests to shower before 10 and “be quick about it”. We’d guess that the latter phrase wasn’t intended to be as curt as it sounds when translated. It reminds me of reading many years ago about a visitor who traveled to Russia and saw a sign that said “If this is your first trip to the Soviet Union, you are welcome to it.”

In any case, we have no problem with getting our showers before 10 and being quick about it.

We learned to walk very slowly and quietly along the boardwalk so as to not scare the wildlife away and sometimes we got lucky. In the month we spent at Goose Creek State Park we saw 2 snakes and a few turtles - including this guy in the first picture so covered in algae he is hard to see. We finally figured out the big turtle likes to hang out near the educational sign about bears along the boardwalk, which made him easier to find.
Buzz! Tiny creatures found at Goose Creek State Park at the end of summer. Feel free to name them for us (silly names welcome as well as scientific ones). All we know is red spider, tree frog, salamander-like thingy.
The best time to spot the White-tailed Deer is early in the morning or as the sun is going down. If you are super stealthy you might catch them in the swamp if you take a stroll along the boardwalk at Goose Creek State Park. @ncstateparks #goosecreekstatepark #whitetaildeer #deer #wildlifephotograpy