Today’s expedition was to some nearby historical sites our hosts took us to, knowing of our fascination with history. [We can’t believe we didn’t bring back a ton of photos. We were probably still having trouble with our camera.]

The two families, minus 13-year-old daughter Ayaka, who is spending all day at tennis practice, piled into the van and headed out through the narrow streets, some of which are EXCRUCIATINGLY narrow.

How narrow are they? Well, back home they’d hardly even qualify as alleys–just about wide enough to get a golf cart and a couple of wheelbarrows down them, yet they’re actually two-way streets. Not only that, but pedestrians and bicycles also frequent them, without the benefit of shoulders or sidewalks. And yet drivers seem to course their way through them with very few mishaps, squeezing off the edge or into a driveway to let another vehicle pass. Motorists appear to be far more courteous than in the U.S., and they seem to operate under some kind of implied protocol, or maybe it’s just a sixth sense, concerning who has the right of way.

Our first stop was the Gyoda City Museum, site of Oshi Castle, a reconstruction of a castle built originally in the 15th Century. 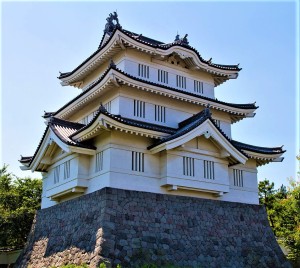 The museum, which overlooks a little grove of the most humongous bamboo stalks we’ve ever encountered, houses a display of local artifacts from the prehistoric to the modern age. These include haniwa, mysterious stone figures that were placed outside ancient tombs.

While their exact function is debatable, it appears that they were intended to guard the tombs, presumably from the intrusion of stone demons. There’s also an exhibit about the manufacture of tabi, the two-toed heavy stockings that have been a tradition in Japan for centuries. About half of the tabi produced in the country still come from the city of Gyoda.

The next stop was the Saitama Museum of Archaeology and Folk Culture, located near 9 large burial mounds (some fashioned in a curious keyhole shape) built between the 5th and 7th Centuries.

Nearby is Osaki Marsh, which figures in the Manyoshi, the oldest Japanese literary anthology.

Before we entered this museum, we paused at a souvenir shop cum snack bar across the street to sample a type of fried potato pie with spices in it, served wrapped in a piece of newspaper. It was rather tasty, despite being heavy on the grease. Outside this shop were a few vending machines selling an astonishing variety of cold drinks, from several kinds of iced coffee to citrus flavored Coke to water to herbal health beverages. It wasn’t unusual to see these machines here, because they’re on the streets everywhere you go. And some of them sell other merchandise besides drinks. Another machine in this particular location offered coin collections and collectible currency.

Keisuke demonstrated for us how it’s possible to purchase items from these machines by holding your cell phone (ketai denwa) against a sensor and punching in a code to have the transaction charged to your account. Another example of Japanese technological ingenuity. [We would imagine the U.S. has caught up to Japan by now on using cell phones at vending machines, but we wouldn’t know since we never use vending machines.] 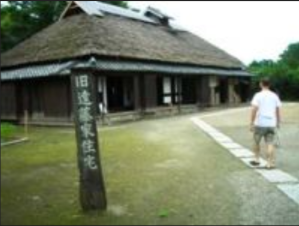 The museum building proper contained only a few relics, but one of them was a 1600-year-old sword with gold inscriptions on the blade that has been designated a national treasure.

Then we had one more brief museum trek, inside one of the actual burial mounds to view a layout of how a VIP’s remains would be laid to rest, surrounded by some of his prize possessions.

On the way back to the house, we decided to stop for lunch. We settled upon a restaurant that featured a (western) classical music motif, complete with grand piano, music box music, and stained glass windows with likenesses of famous composers. The culinary motif was essentially spaghetti, although it was prepared in quite a different fashion from back home. We haven’t seen any hint of tomato-based sauces here; the pasta we ordered was covered with a buttery amalgam of vegetables that wasn’t bad at all.

Japanese servers, we’ve noticed, have a way of returning promptly and cheerfully, providing excellent service–and generally without receiving tips! This is in perfect accordance with the service we’ve witnessed at other business establishments–when we bought the camera, we saw sales clerks literally running through the store to tend to a customer’s needs. And it isn’t just in places of business that courtesy rules. When we told our hosts, for example, about some of the rude drivers in America, they were astounded–they almost never see such a thing here. It’s unwise to trust stereotypes, but one stereotype about the Japanese is perfectly true: they are incredibly polite and considerate.

Anyway, while we were in the restaurant, a thunderstorm struck–the fringe of the typhoon–bringing some welcome relief from the heat. And Toshihide insisted on going to get the car and bringing it up to the door so that nobody else would get wet.

Back at home, we watched some footage on TV of the typhoon and tried to make sense of the commentary, but the commentators spoke entirely too fast for our English-speaking ears. We noted that weathermen here employ computer graphics techniques on the screen that are more glitzy than any we’ve seen in the States. By the way, the TV also has been airing a great deal of footage about the Prime Minister, who is stepping down, and will be replaced in an election next month.

We’re getting a real kick out of the family dog, Hana (“flower”), a diminutive Chihuaha who charms the tabi off even those who normally don’t care for dogs at all. She’s the first dog Dennis has held in his lap for many years.