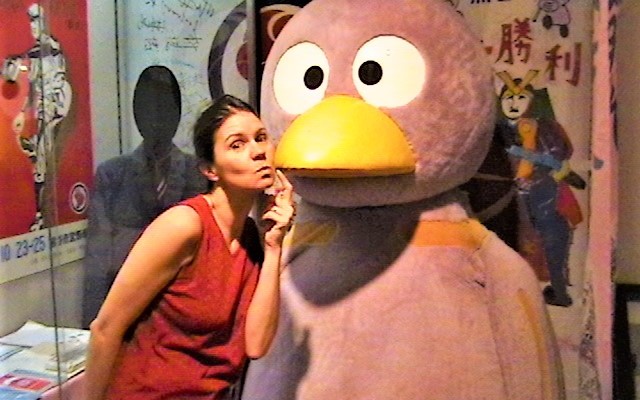 Our long day at Disney is now behind us, although that doesn’t stop Zephyr and Kimberly from making everyone crack up with their spot-on imitations of Mickey Mouse and Donald Duck respectively. We all slept in a bit late today, except that Toshihide was, as usual up at 6:30 at least long enough to feed the yapping little Hana monster.

This morning, or at least what was left of it, Kimberly began viewing photos from yesterday on her laptop, and ended up entertaining our hosts with a “slide show” of pictures from the U.S. These included scenes from Zephyr’s favorite time of year, Halloween; and since we noticed yesterday that Disney is gearing up for the occasion, we asked Yukari whether this holiday is generally celebrated in Japan. She replied no, which is not surprising, but she commemorates Halloween with her students, who are learning American culture as well as the English language. We think it’s a great idea to expose kids of any country to the trick-or-treat tradition, and we’re sure their dentists will agree.

Today was housecleaning day, and we tried to contribute our own labors to the cause as much as we could, but it isn’t easy when you’re staying with folks who insist on doing everything for you. We were intrigued by the central vacuuming system installed in the house; each room has a port in the floor, to which a vacuum hose can be attached, then you just flip a central switch and the whole house functions as a vacuum cleaner.

At lunch, we were served some vegetarian “ham”, which a friend of Yukari’s sent over when she learned that some American vegetarians were coming. (Yukari displayed her sense of humor by informing us it was vegetarian, and then gasping with horror and pretending it was real meat when Dennis started eating some.) Though quite good, it was rather different from comparable products we have at home, and it appears that vegetarian “meats” are not nearly as common here. We also had some more of the rice grown in the paddy next to the house; we inquired what time of year it’s harvested, and were told that it would be in October. And Dennis told them, quite sincerely, that if he were ever here in October, he’d be glad to help them harvest it.

This afternoon, the kids took off to see a new movie by the son of legendary animator Hayao Miyazaki, of whom Zephyr is quite fond, and of whom we’ll hear more later. This much we knew in advance, but what we didn’t learn until later was that the film was Tales of Earthsea, based on the work of noted American science fiction author Ursula LeGuin. Perhaps we’ll have a chance to catch it in the States in a couple of years. In the meantime, Zephyr is one of the very few Americans to have seen it, even if he didn’t exactly follow the dialogue very well.

Meanwhile, Kimberly and Dennis were escorted by Toshihide to take a peek at the local library. Since we’ve performed at innumerable libraries across the U.S., we were curious to see what a library in Japan would look like. The answer is that it really didn’t look different from an American library. It was a rather small branch, but nonetheless the children’s department had a shelf of books in English, including the entire Harry Potter series.

While we were in the building, we headed upstairs to the Kumagaya City Museum, an unpretentious little facility that nonetheless turned out to be perhaps the most engaging museum we’ve visited.

It displayed a full assortment of the wildlife native to the area (stuffed and mounted, alas, but that’s why they call it a museum instead of a zoo), including varieties of birds we’d never seen before, even in books. There was also a wild pig, about the size of Hana monster. And most impressive of all, a fish called the Musashi Tomi-yo, which is found nowhere else in the world except in the river around this community. What makes this species so special is that it seems to think it’s a bird – it builds a nest under the water.

Another sector visually related a history of the community, going back to the days when coins with holes in them were carried on a cord, and leading up to an exhibit about a prominent local author.

Most noteworthy of all was a display about World War II. American forces bombed Kumagaya City the day before the war ended – upon hearing which Kimberly told Toshihide, “gomen nasai” (very sorry). This was not an atomic warhead, such as demolished Hiroshima and Nagasaki, but the photos reveal that they still wrought some pretty nasty devastation. There were also some pictures drawn by children at the time depicting their impressions of the horrors, as well as an assortment of military and general war propaganda posters. (Before we came here, we’d heard that it should be considered taboo to discuss The War with the Japanese. But they’ve broached the subject to us several times since we’ve been here. Our impression is that in fact, they want to discuss it, but are perhaps afraid that Americans don’t want to.)

Later in the day, Toshihide drove us to a hotel he was familiar with to take a look at the traditional Japanese garden on the grounds. We’ve seen Japanese gardens before, of course, but never in Japan. As she snapped some shots of the brightly colored koi (carp) in the pond, Kimberly commented that in this place it’s impossible to take a bad picture (an exaggeration of course — we still manage). Even with cameras as temperamental as the two we’re currently stuck with.

Tonight our hosts took us out to eat – something they’ve been doing rather often. This time, it was because of something Zephyr had brought up. For some time now, he’s been a devotee of manga, which are graphic novels (whatever you do, don’t call them comic books) published in Japan. In one of these, he’d read about a dish he referred to as “Japanese pizza”, which he mentioned he’d like to try. So they were taking us to try it.

Initially our target was a franchise restaurant noted for this particular concoction, officially known as okonomiyaki. When we pulled up into its parking lot, we heard a sound somewhat like church bells, followed by an announcement on a P.A. system. We were told that the announcement was to the effect that it was now 6:00, and children should go home. (This apparently was just a municipal service, as we didn’t hear about this sort of thing anywhere else.)

Inside the restaurant, we inserted our shoes into wooden lockers equipped with wooden keys about the size of credit cards, only thicker – a safety precaution that seemed a bit odd considering the low crime rate in this nation. We retrieved our shoes again shortly, however, because we discovered that there was a 45-minute wait for a table.

Yukari and Toshihide were disappointed, because this evidently was their favorite place to have okonomiyaki. But after pondering for a moment in the parking lot while Zephyr and Ayaka wrestled, they came up with an alternative, an eatery that was a bit more out of the way. In driving there, Toshihide took a number of turns and false turns and convoluted turnarounds, and at one point – we swear – even contemplated driving up what appeared to be a bicycle path.

But it was all well worth the trouble. This particular restaurant was smaller, simpler, less crowded and more intimate than the first – seemingly a sort of mom and pop operation. When the waiter (who also appeared to be the owner or manager) came to our table, Toshihide said, “Our friends are vegetarians; do you have something they can eat?” The gentleman asked whether we eat eggs and cheese, and upon getting an affirmative, he said that yes, they definitely do. (This was all in Japanese, of course, and we were quite pleased that we were able to follow it.) Most important, the food was outstanding, the best meal of our entire trip. In fact, Yukari and Toshihide decided that they liked it better than the place they originally intended to take us.

“Japanese pizza” is perhaps not a very accurate appellation for what we had. It was more like Japanese pancakes, or at least pancakes aspiring to be omlets. In any case, it was a grilled entrée made from batter, an egg, some vegetables (some of which we couldn’t identify) shredded cheese on top (the first cheese we’ve seen served in a meal here, except for the grilled cheese sandwiches Yukari made for us one day) and a dark sauce. It was the first meal, excluding some of our breakfasts, which didn’t include either rice or noodles.

What made the dinner especially memorable was that we were able to cook it ourselves, on an electric grill built into the center of the table. Our hosts decided not to cook their own, but ordered it fully prepared – perhaps the fact that theirs had meat in it made self-cooking a bit more of a hassle. In any case, we enjoyed the opportunity to stir up the little bowl of batter, oil the grill, pour on the batter and watch it burn. By the time we’d made three attempts (one serving for each of us, although each one was nearly enough for all of us) we were pros.

When we got back home, Zephyr and Keisuke walked to the video store and rented a couple of films, apparently not satisfied to watch just one a day. They stayed up until the wee hours watching them, including Saw, which is one of Zephyr’s favorite horror flicks. He’d already seen it several times, but never with Japanese subtitles before. Keisuke loved it too, although he’s rather squeamish about such things.