Eiffel Tower? Notre Dame? The Louvre? Well sure, these and many other attractions are on the must-see list when visiting Paris for the first time. But none of them is at the top of our list. To get to the top, we have to go underground. Our first priority is to descend beneath the streets of Paris.

The Catacombs Of Paris is a subterranean ossuary, a series of underground tunnels (but then all tunnels are really underground, aren’t they) containing millions of bones. Human bones. Originally a network of limestone mines dating back many centuries, the tunnels became a repository for bones starting in 1774, when the city’s cemeteries became SRO. The catacombs have been open for public tours since 1874. And we’re part of the public. 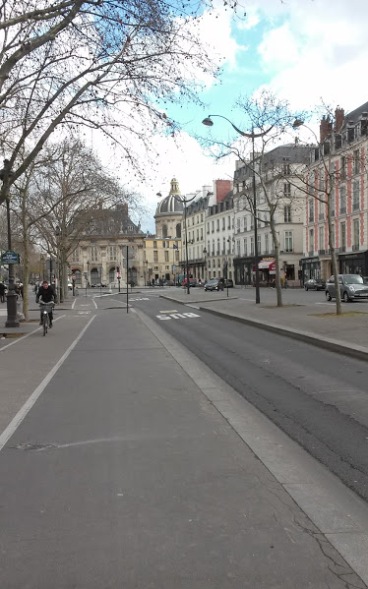 We arrive in the heart of Paris at about an hour before the Catacombs open/ opens (still not sure whether to treat the word as singular or plural). So we sit on a park bench along with a homeless guy and have our breakfast. We didn’t want to waste time eating at home before we left, so we packed along some yogurt and granola, along with our collapsible dishes. Then we stroll around the neighborhood a bit, and I again fail to find decaf coffee. (But I do notice there is a restaurant called Indiana.)

By the time we get back to the entrance to the Catacombs, it’s almost opening time, and a line of about 15 people has formed. We pay our 12 euros each and enter the land of the dead.

First we descend an impossibly long winding stairway without landings, a descent that makes you positively dizzy. It’s like the stairway to Edgar Allan Poe’s basement. Then, once we hit bottom, there are some long corridors with really nothing in them except some inscriptions. We’re beginning to wonder if this is all just a ripoff. 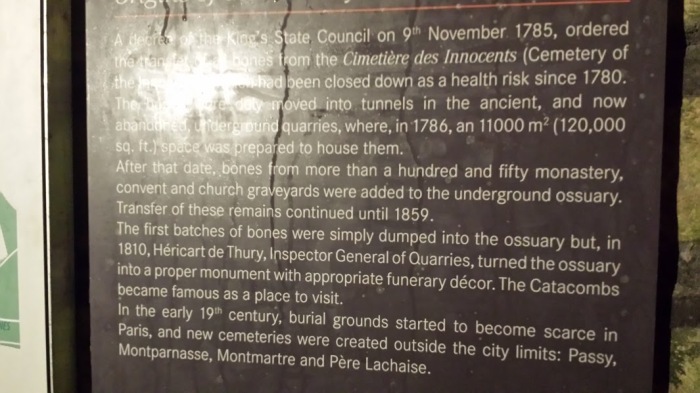 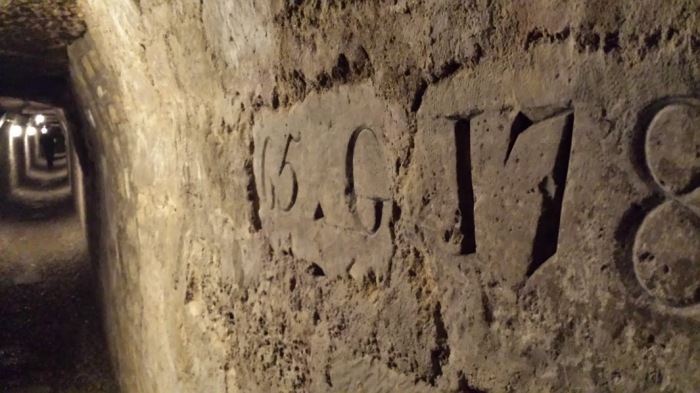 But then we round a corner, and they’re waiting for us. Bones, them bones, them dry bones. Stacks and stacks of bones.

Bones in neat stacks and formations.

Bones in artistic and whimsical arrangements. 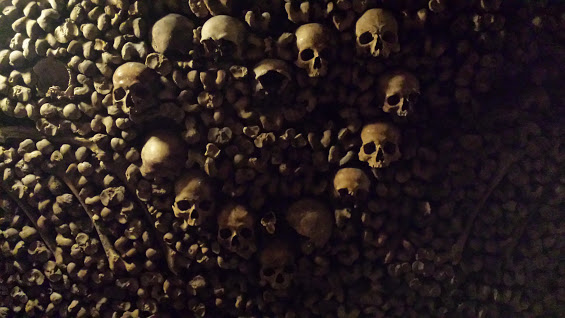 Bones and skulls that peer and leer over your shoulder, trying to whisper the secrets of thousands and thousands of individual lives, each significant in its own way. 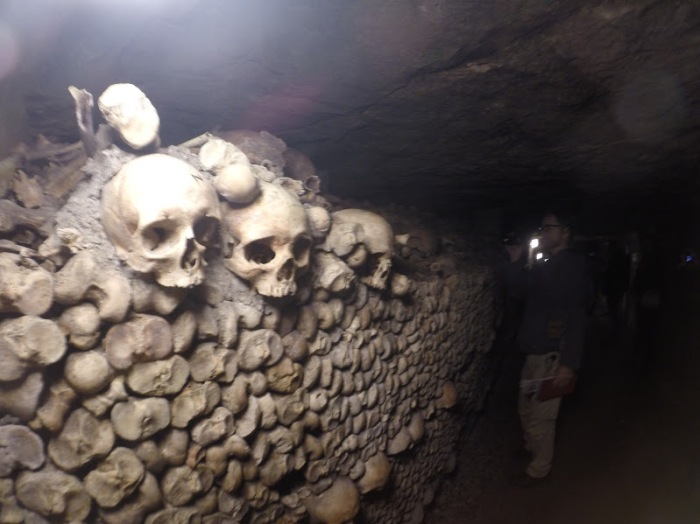 Skulls that follow you down the long, dark corridors with eyeless eyes.

For some strange reason, a song keeps going through my flesh-covered head.

One of my favorite songs from the past few years, for many reasons.

See These Bones by Nada Surf. 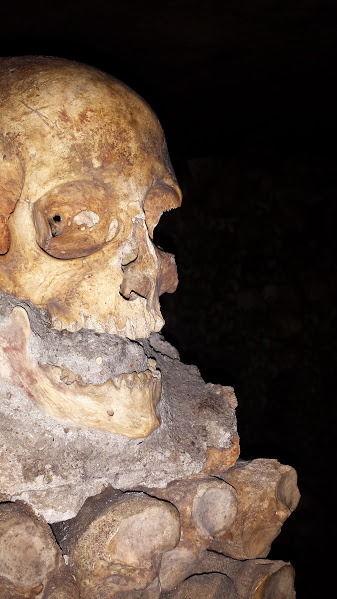 Bones that would make some of our fellow Halloween enthusiasts back in the States ghoulishly green with envy. 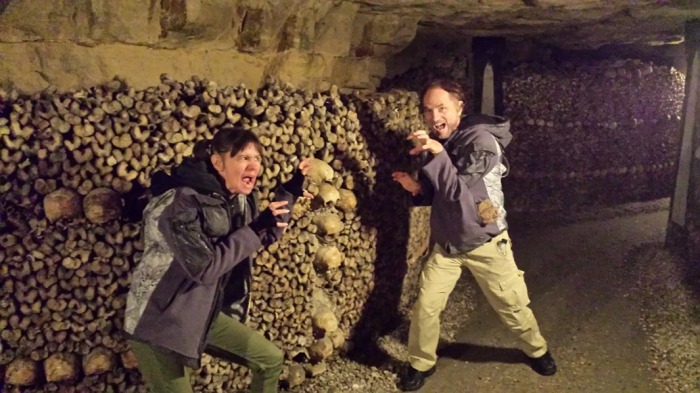 Finally, we emerge again to the realm of fleshly delights, and to our relief, the staircase spiraling back up actually seems shorter than the one going down.

Across the street is a gift shop, where we browse for something to send home to our son, a fan of Halloween and Rocky Horror and all things macabre. We find just the thing, a little hardbound notebook with a black and white cover commemorating the Catacombs, complete with images of bones.

Then it’s on to our next stop, Luxembourg Palace. Built between 1615 and 1645, it’s even older than the Palace Of Versailles. In addition to serving as a home of royalty, it served after the Revolution as a prison — which means, I suppose, that it was still a home for royalty. It was later transformed into a museum (the precursor of the Louvre), a home for parliament, and for a brief time the home of the Luftwaffe. 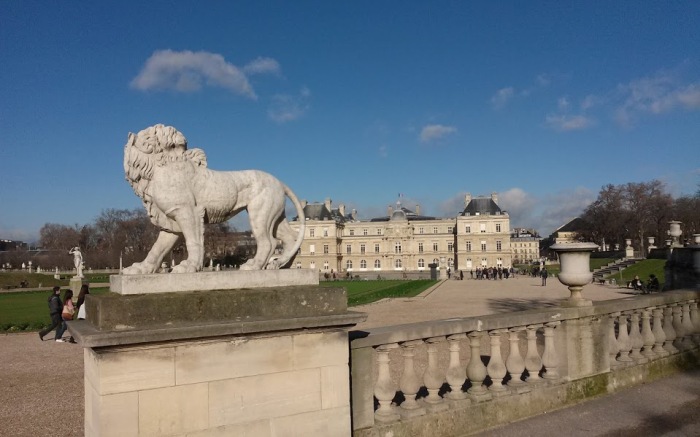 Like Versailles, Luxembourg is noted in part for its gardens. But also like Versailles, we arrived at the wrong time of year to see it in its full blooming glory. 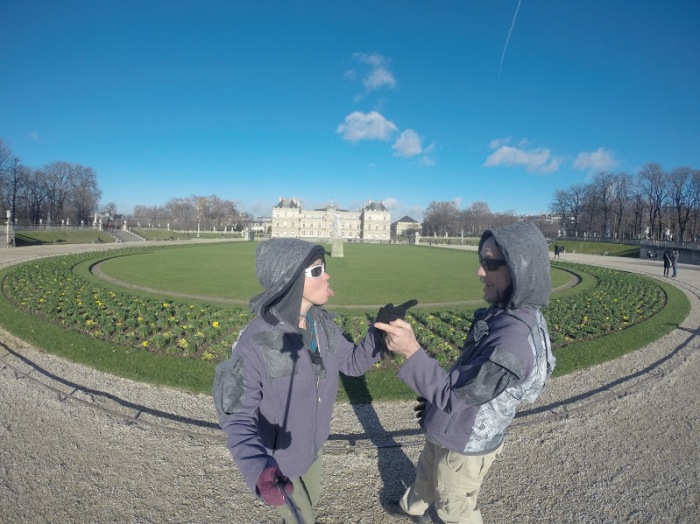 The Christmas trees in town, however, seem to be hanging on quite nicely, like this one in front of one of those magnificent old churches that you apparently stumble upon everywhere in Europe.

Since today was planned mostly as a day for walking and soaking in the sights, and since we just did a palace tour yesterday, we decide not to go inside this palace. We would have taken the time, however, to catch a show at the famed marionette theatre located in the gardens. But alas, it only has performance on certain days, and while tomorrow is one of them, today is not.

I stop to peek at the menu of Cafe Procope, the oldest restaurant in Paris, which opened in 1686. I’d bet the prices have been raised a time or two since then. 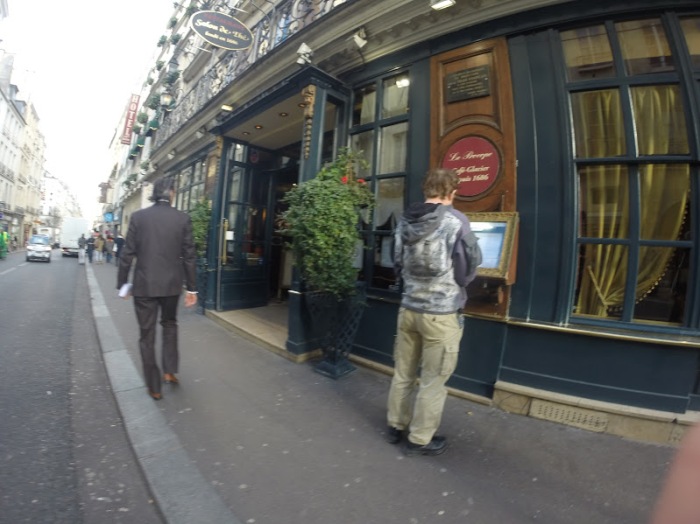 Next a stroll along the river Seine, which on this steely grey day looks austere but still poetic. A barge goes by in one direction laden with garbage (bargage?) and passing it in the other direction is a cruise ship laden with tourists. Fortunately they were not headed for the same destination. Did the tour operator on the boat below say anything to the passengers about the bargage barge, or try his/ her best to divert attention away from it?

Across the river is the Louvre, another former palace that is now one of the world’s foremost art museums.

In the wintry atmosphere of this day, it looks almost like a 3-D Renoir.

We won’t be going inside the Louvre today — we’re saving that for a later visit. But we have to mug for photos beside the iconic glass pyramid in front. 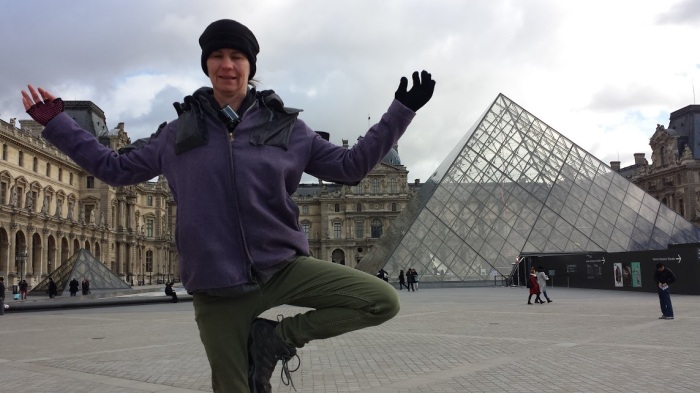 As well as the picturesque arch nearby.

We worm our way through the gauntlet of vendors aggressively hawking trinkets and selfie sticks. Many, many vendors hawking selfie sticks. They seem to be the item du jour, as they might say in a French-speaking place.

Across the  gardens stands a huge Ferris wheel, which we briefly entertain the notion of riding, but even with the mostly enclosed cars, we decide that we’d have too much exposure to the wind and we are quite chilled enough.

Making an illicit dash across a wide and busy roundabout, we come to a filmmakers’ favorite spot in the city, the Arc de Triomphe. 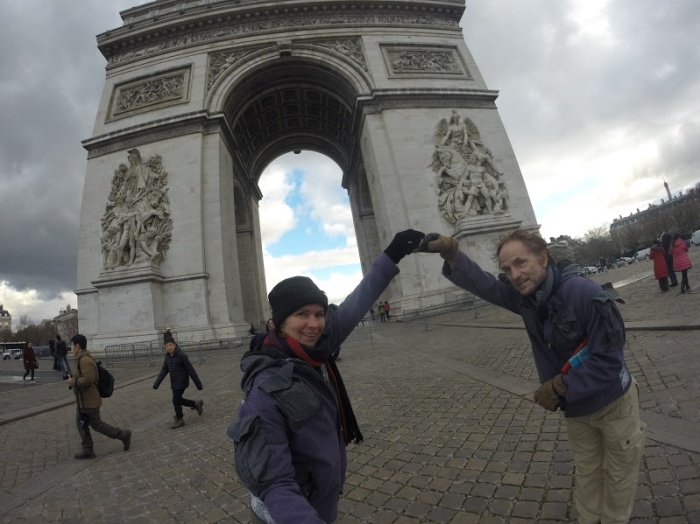 Commissioned by Napoleon in 1806, it wasn’t completed until 1836, long after his death.

It features some rather exquisite detail. And there’s also the Tomb Of The Unknown Soldier, actually representing countless unknown soldiers. 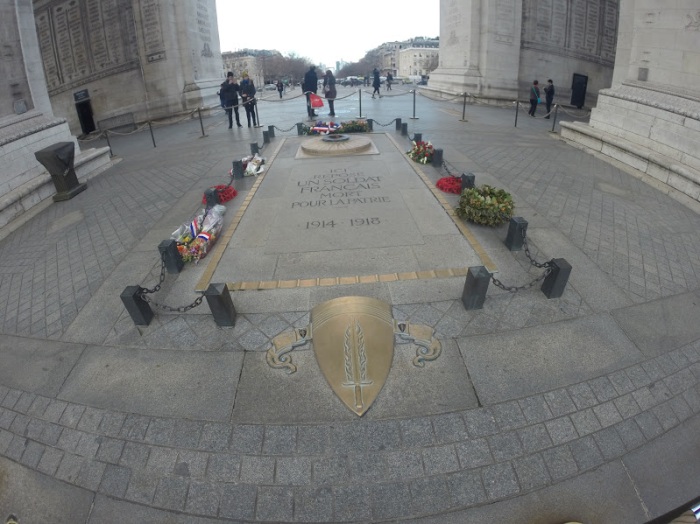 The arch sits on the Champs Elysees, the notoriously ritzy shopping district that is somewhat comparable to Rodeo Drive in Beverly Hills. We stroll down the street not on a shopping spree, but on a gawking spree. And there’s also the fruitless quest for another free toilet, which we are beginning to need by now. Maybe I should reexamine my habit of drinking so much liquid in the morning. Maybe it’s a good thing I’ve had a hard time finding decaf coffee here.

It occurs to us that it might be nice to have scarves to keep our necks warm, so we go into a clothing store called Celio and to our surprise actually find a couple of scarves we like at a non-luxury price. Originally tagged at 25 euros each, they’ve been marked down to 10. So we bag them, and now we are attired like the most fashionable of Parisians. More or less.

Thus properly fitted, we continue toward a distant landmark we’ve seen towering above the city skyline: a strange, rather skeletal steel tower. Gotta check it out. 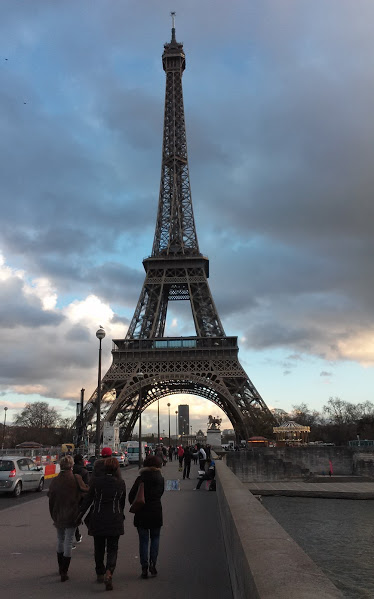 Up close, it looks even odder. 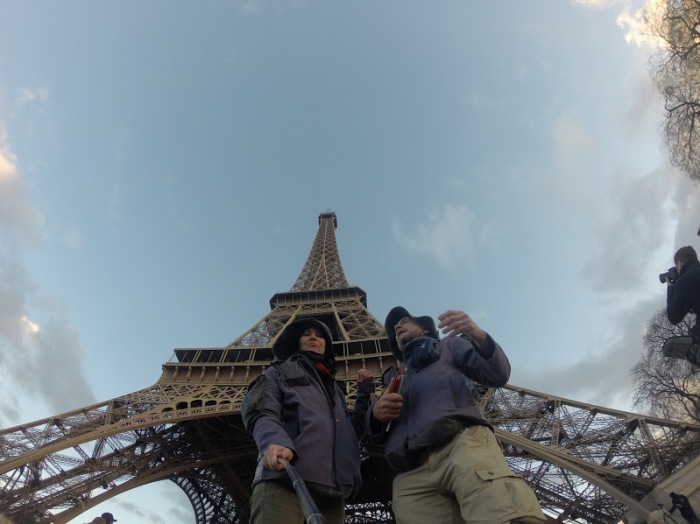 Maybe it’s just the kooky tourists standing under it.

This is another attraction we’ll have to explore further on another day. It’s getting darker and colder and hungrier. But we can’t help admiring the carousel nearby.

We also greatly admire something else that we find near the carousel: another actual free restroom.

Back at home, we spend our last evening with our fabulous hosts, Aurore and Shan — who shares with us a couple of dishes he’s cooked from his native India. He could become a fine chef if he decided to.

Fortunately, Kimberly and Aurore agree to be Facebook friends. These are the kind of folks you don’t want to lose touch with.

One thought on “Dennis and Kimberly’s Excellent and Epic European Adventure, Day 4”