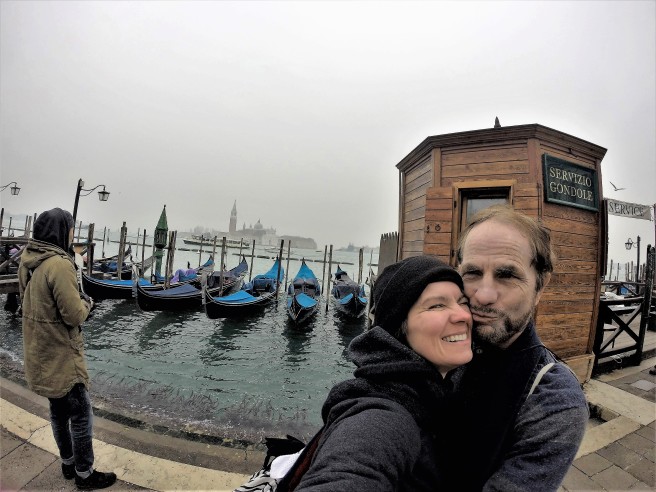 Yes, today’s destination is the fabled city of canals, Venezia. We walk to the train station in Musestre, stopping along the way to pick up some grub at a mom and pop shop. About halfway to the station, we realize that Kimberly has neglected to bring along the Eurail passes that she has custody of, so we have to retrace our steps, and by the time we finally get to the station, it’s rather crowded. But soon we’re pulling into a city that seems to be constructed entirely of postcards. 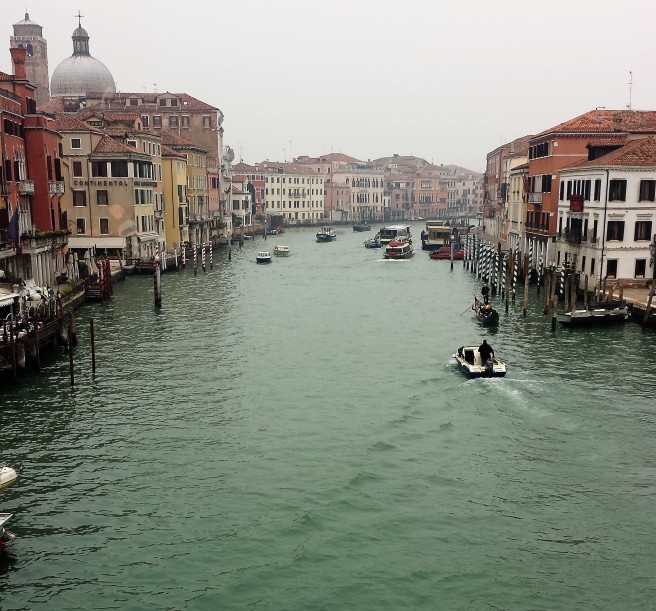 A splendid and prestigious municipality since the Middle Ages, Venice consists of 117 little islands.

A labyrinthine network of narrow canals laces through the city like capillaries.

There are no cars, not even any bicycles. People get around by boat.

Boats as simple or as elegant as you desire.

Instead of taxi stands, hotels have gondola docks.

Luggage is loaded on with cranes. 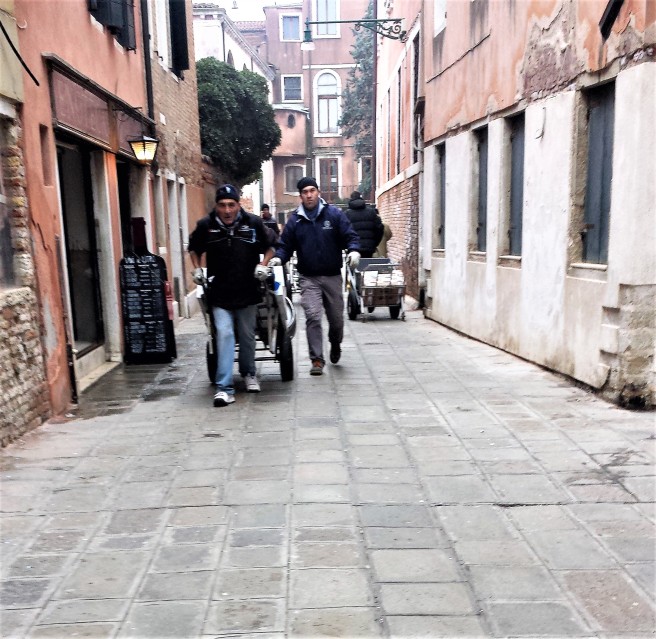 The mail truck is a boat. The ambulance is a boat. Naturally, there are many, many bridges. 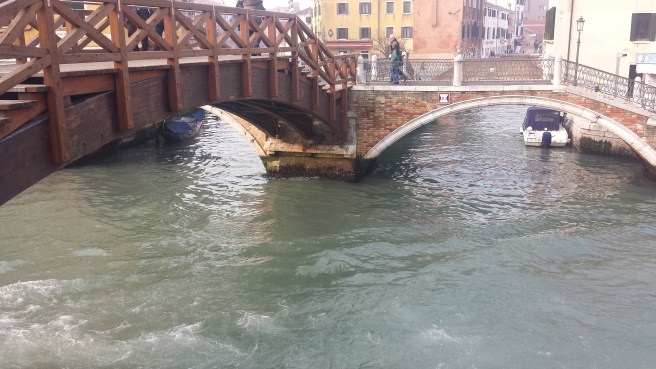 One of them is the notorious Bridge Of Sighs.

Constructed in 1600, the bridge connected the interrogation room in the Doge’s palace to the prison. According to legend, then, it was the last glimpse of freedom newly convicted prisoners had for at least quite a while. Its English name was conferred by the British poet George Noel Gordon (Lord Byron), whom we encountered briefly in Rome. In his 1818 narrative poem Childe Harold’s Pilgrimage, he iambically immortalized it thus: “I stood in Venice, on the Bridge Of Sighs/ A palace and a prison on each hand.”

The sliver-width streets, if you can call them that, give the impression that they were the original inspiration for the concept of mazes. It’s very easy to get lost here if your GPS malfunctions. That’s because the streets here were never planned; they were just a spontaneous afterthought, something to make out of the random little spaces that were left over after houses were constructed. The canals were, and still are, the real thoroughfares. 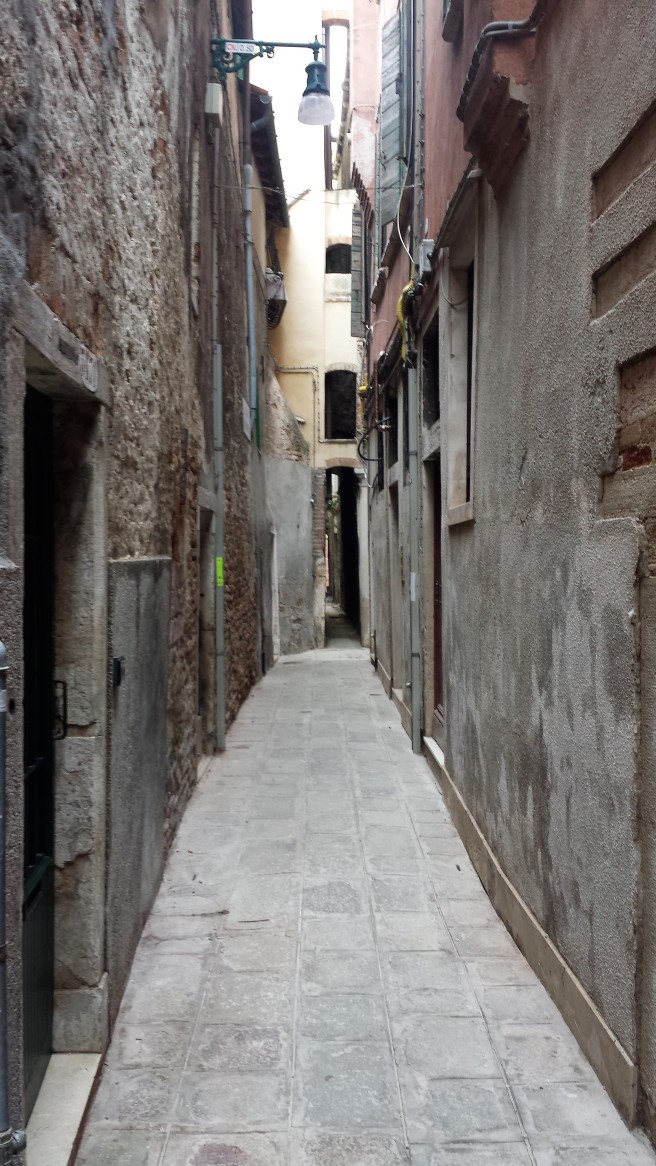 The narrowest street in town, and one of the narrowest in the world, is Ramo Varisco, otherwise known as Calletta (meaning, oddly enough, “little street”). It’s only 53 cm wide — that’s a little under 21 inches for those on this side of the pond. It’s just about wide enough for a couple of people (or one hefty one) to get stuck in. And it’s only a few yards long, leading out to nothing more than a disappointing little drop into a canal. Still, it’s an oddity worth ferreting out — in fact, just finding it is half the fun. The other half is posing for a silly photo once you get there. 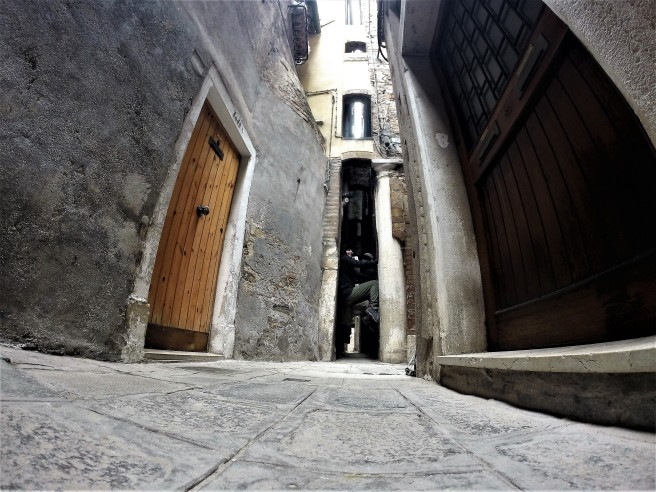 There are also plazas where vendors peddle their wares in quaint little shops or on the streets.

Some of these items seem especially geared to English-speaking tourists. 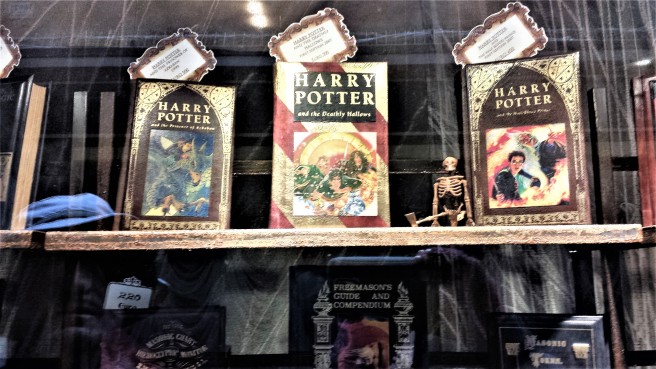 There are a couple of awe-inspiring mask shops — they’re very much in demand for Carnaval, which is coming up soon.

The shopkeepers frown on photography of the masks, so we don’t overdo it.

Some of these are quite expensive — we saw one with a tag of 1300 euros. 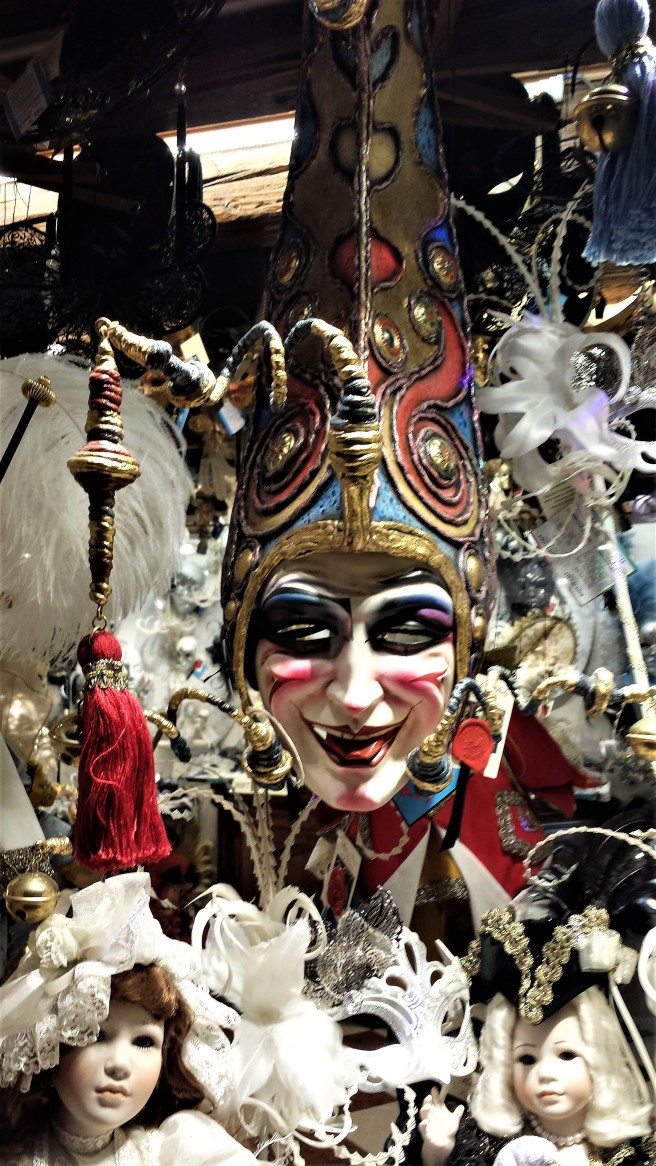 There are also somewhat less pricey masks for sale at stalls outside. 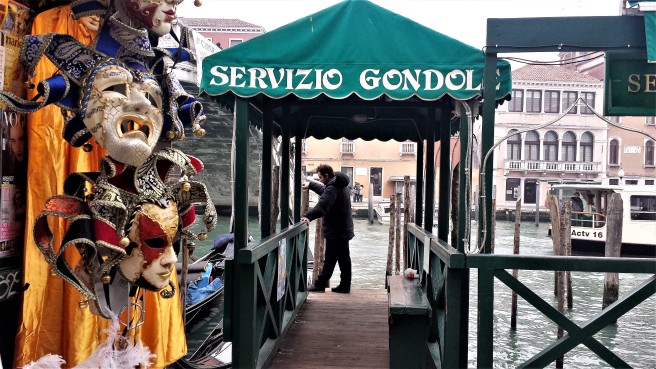 While it might be fun to be here for Carnaval, despite the suffocating crowds that are certain to be here, we as theatre folk find it just as interesting, if not more so, to see the prep work. 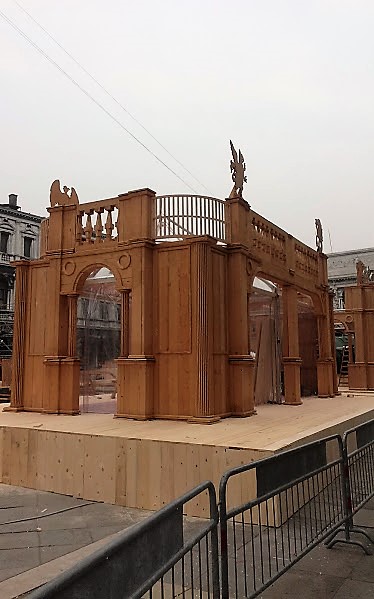 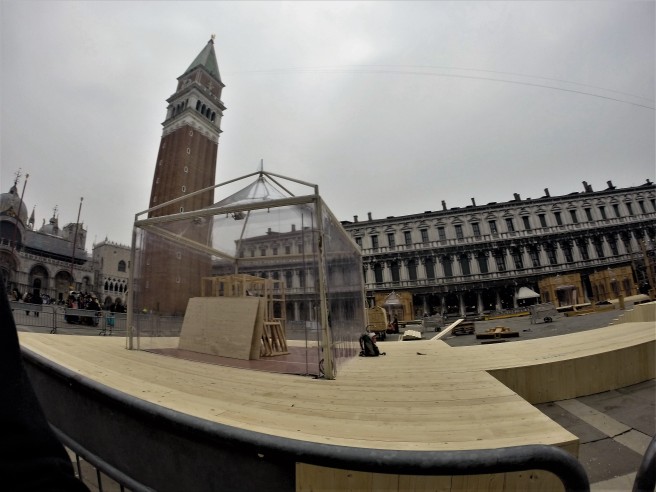 At some point we realize there’s just no getting around it: we’re going to have to find a bathroom. Unfortunately, they’re just as expensive here as everything else: one and a half euro, as opposed to maybe half a euro elsewhere in Europe. Very odd, since there are so many canals that they need to keep filled. But we hit upon a plan. The trains have free toilets for passengers. So we can walk back to the station and get on one. If anyone questions us, we can just show them our Eurail passes, and maybe conjure up our thespian skills to play dumb Americans and pretend we got on the wrong train.

Casually strolling onto the platform, we find one with doors open, scheduled for departure in 20 minutes. There are conductors and other personnel standing around chatting, but no one stops us. So we go aboard, take care of business, and exit a different door, trying to avoid anyone who may have seen us get on. We have no idea where the train is headed, or how long it would take us to get back if it took off.  But nobody questions us. And fortunately, the toilets are not of the direct deposit variety.

Back on the “streets”, we encounter yet another clever way someone has come up with to extract currency from tourists. A fellow has given what might be described as a perm to some birds, and is letting tourists pose for photos with them — for a little donation. 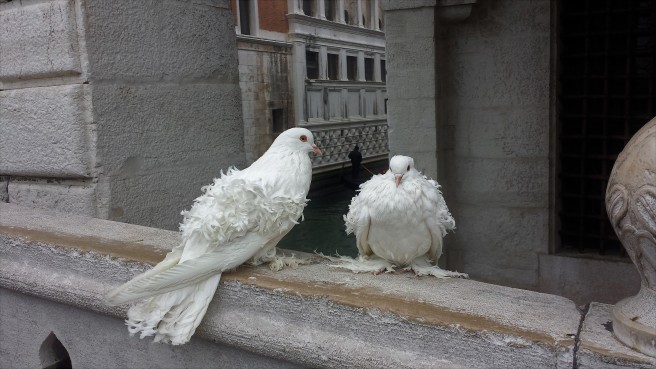 I stumble upon a plaque marking the death place of my favorite composer (who coincidentally shares my birthday), Richard Wagner — and since he was German, then of course his name is pronounced REE-kard VAHG-ner.  He expired on this spot on Feb. 13, 1883, just shy of 70. If you think you’re unfamiliar with Wagner’s music, you couldn’t be more mistaken. Sure, he wrote mostly operas, but the orchestral music from them has become enormously popular, not only in concert halls, but also on the soundtracks of films and cartoons. One of the most popular is the prelude to Act III of Lohengrin; but what follows it is even better known. Opera buffs know it as “Treulich Geführt” (faithfully guided) or The Bridal Chorus, but everyone else calls it “Here Comes the Bride”. If Wagner could collect royalties posthumously every time that tune has been played in the past 150 years, he’d certainly be the wealthiest dead composer ever.

Nearby is the Venice Casino, and since I have a certain fondness for gaming establishments, we go in to check it out. But the attendants in the lobby inform us that there is an entrance fee of 10 euros. That’s 11 bucks just for the privilege of going in to sacrifice more money on the altar of diversion. So we pass. 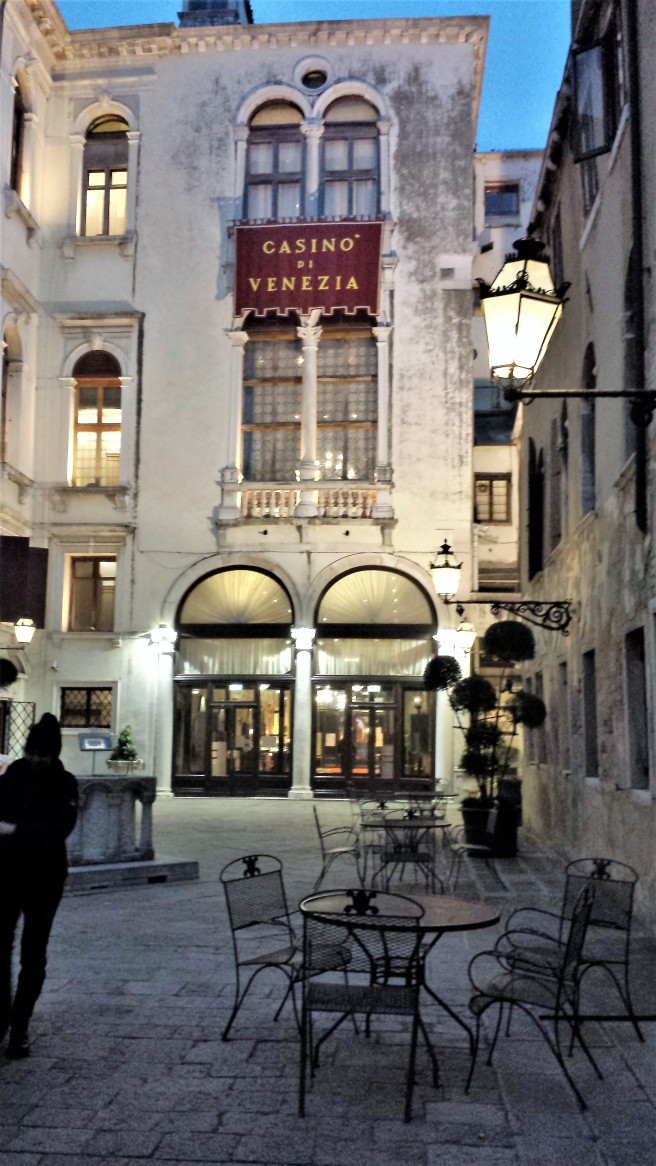 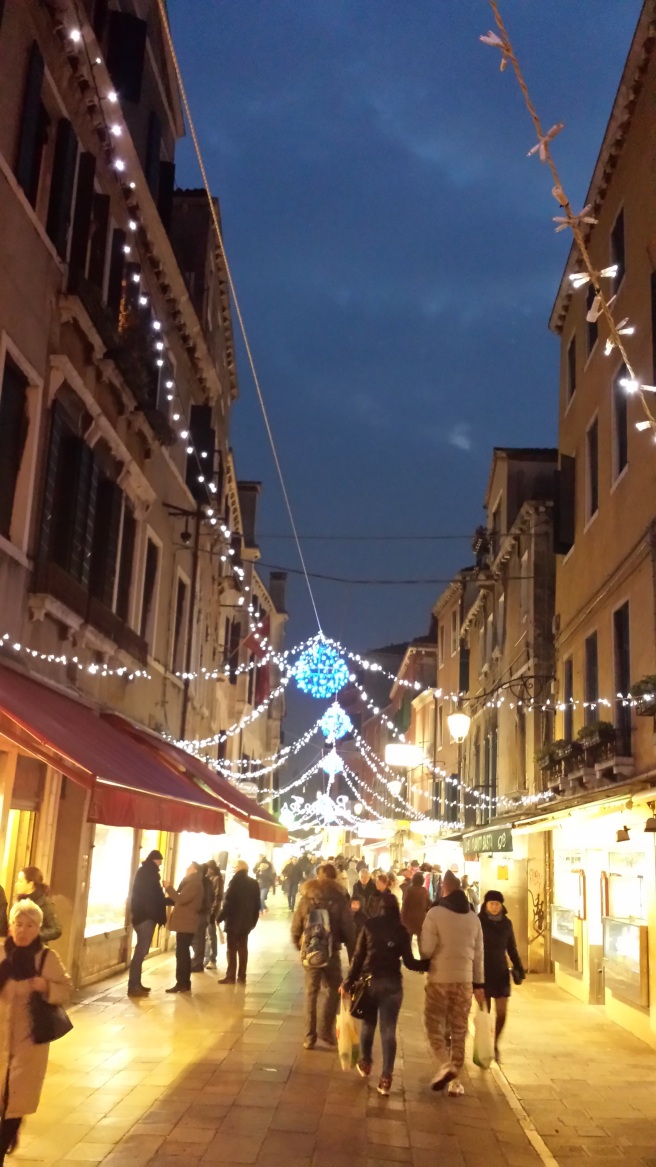 And all too soon, it’s time for us to head back to the Ponderosa.

Back at home, we have a congenial bilingual chat with our hosts, sharing photos of our respective sons, who happen to be the same age (25). Their son Mattea, who handles the booking on Airbnb, travels the world a great deal, and is currently in Brazil. He’s rather a daredevil — they show a video of him bungee jumping and performing other such feats. And like us and our son Zephyr, he is also a vegetarian.

The man of the house is leaving very early in the morning to participate in a bocce tournament. So he says his farewells to us now. Then we go to bed and fall off to sleep to the gentle soughing of the newfangled wood pellet-burning stove in the hallway. Not quite as soothing as the lapping of water in a canal, but almost.

About Us
Act!vated Theatre
We Volunteer
Newsletter Updates
Follow travel with a theatrical flair on WordPress.com