Our train to Venice doesn’t leave until this afternoon, so we have the morning to wander around Florence some more. We ask Giulio if it’s okay to leave our gear behind, and he says it’s fine — unlike our hostess in Rome, he doesn’t have someone else coming in right away.

Once again we pay our respects to the Ponte Vecchio and the magnificent workmanship of Il Duomo.

This time we take note of the incredibly lifelike statue of its designer, Brunelleschi, gazing up wistfully at his own handiwork. 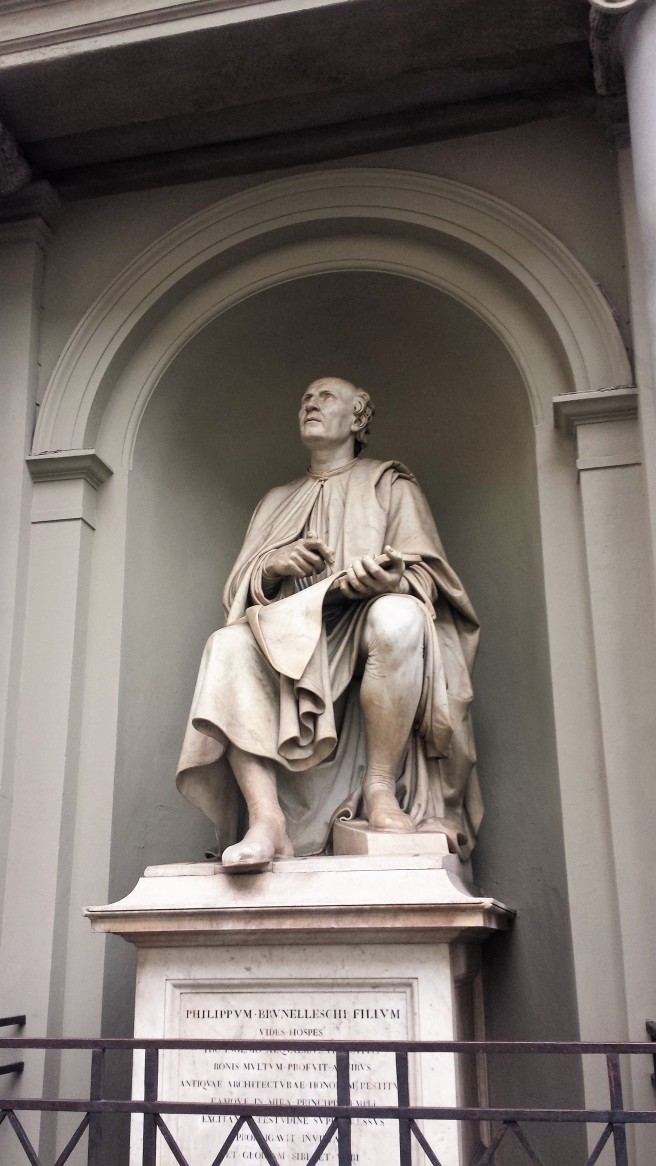 We also find the circular patch in the pavement from when the huge copper ball on the roof toppled off after being struck by lightning in 1600.

A return to the sculpture exhibit beside Palazzo Vecchio was also on the agenda. 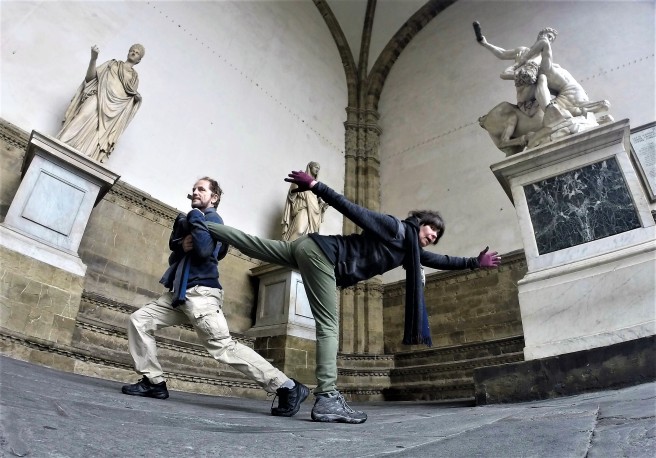 Nearby, we see what appears to be another amazingly realistic sculpture. But it’s actually a busker with an amazingly good disguise.

We’ve been taking note of a number of traffic signs, the standard international sign for No Entry, that have been cleverly altered.

This is an ongoing project by a local artist who calls himself Clet. (His name is Clet Abraham, and he’s originally from France.)

The story is that his outdoor installation is unauthorized, and originally the police came along regularly and undid his work. But finally they realized what an asset for tourism it was, and adopted an unofficial policy of what the hell. 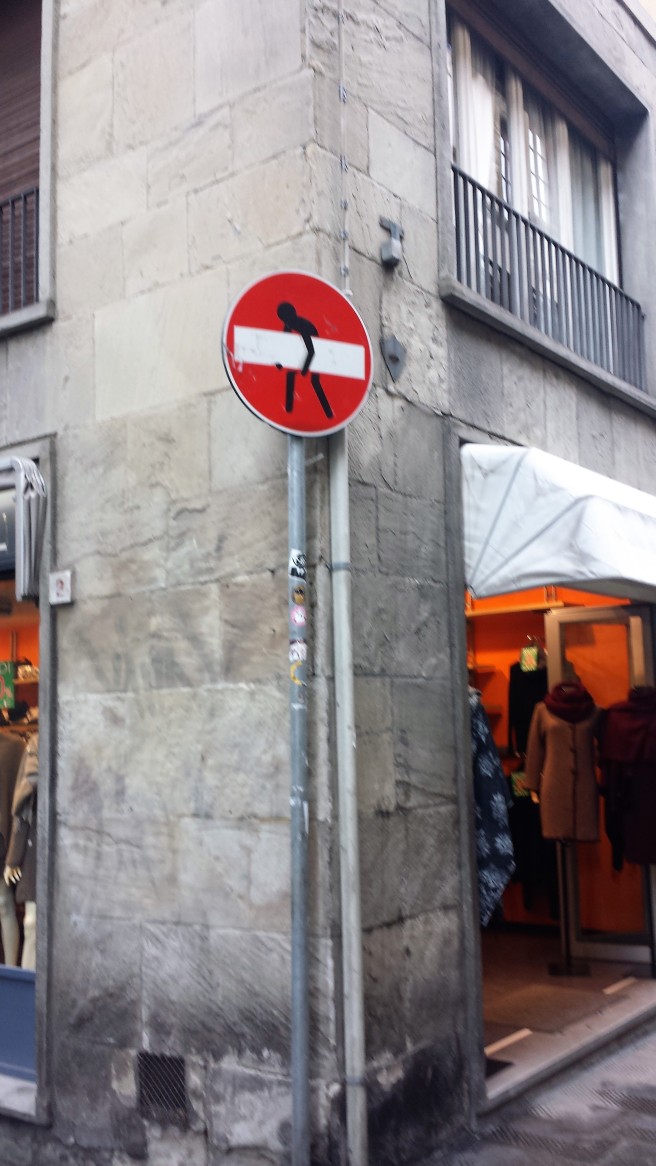 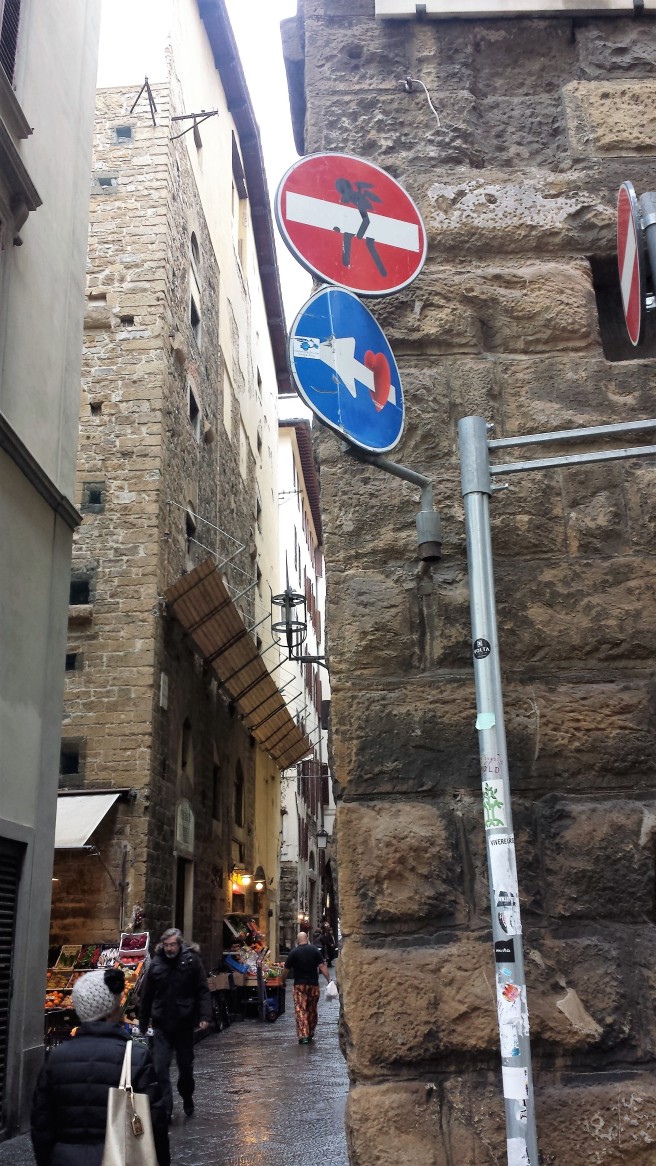 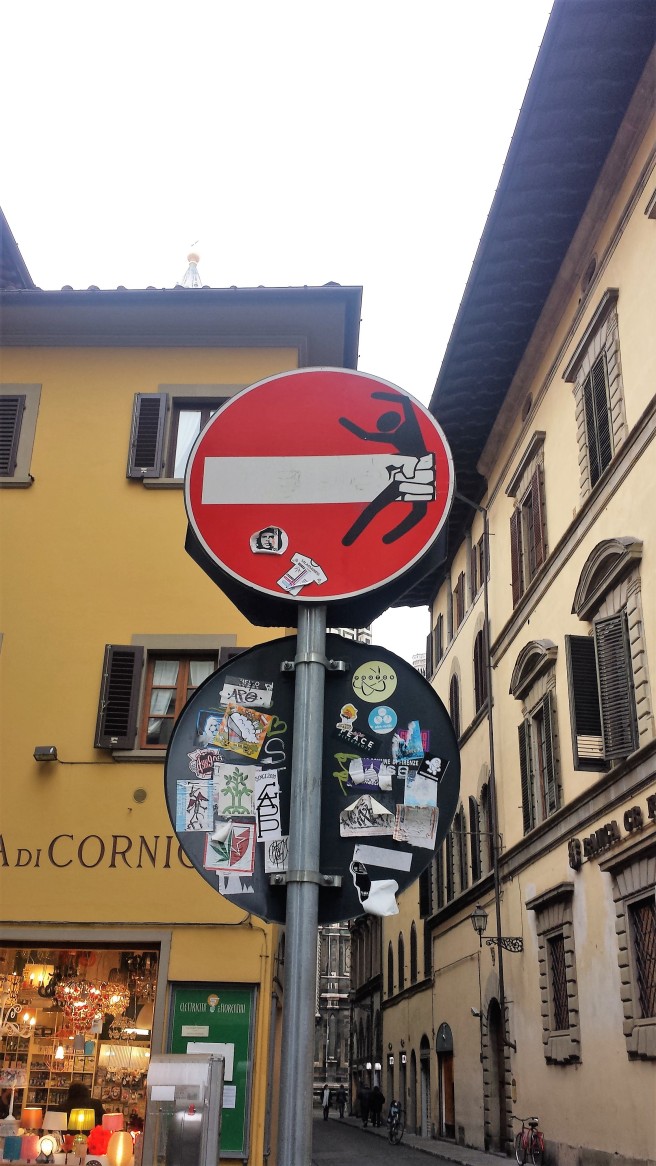 We’ve also noticed that motorcycles and mopeds are extremely popular.

The Basilica della Santissima Annunciata (Basilica of the Most Holy Annunciation) is on my agenda because I’ve read a legend about it. It seems there was a certain monk around 1250 who was painting a picture of an angel, and he was frustrated by being unable to get the face just right. So he lay down and took a nap, and while he was snoozing, an angel appeared and finished the face for him. Not sure if it was the same angel, making it a self-portrait, but this is the kind of story that really hooks a connoisseur of folklore like myself. And let’s face it, anyone would be curious to see an angel’s painting — would you be able to see brushstrokes made by a wing feather?

The Basilica is at the end of a courtyard, on the right side of which is the Ospedale degli Innocenti (Hospital of the Innocents), founded as an orphanage in the 15th Century. In the old days there was a wheel at the front on which a mother could place an unwanted baby and then ring a bell, and then someone inside would turn the wheel to bring the child inside without the (probably unwed) mother being identified and shamed.

Inside the entrance of the Basilica are a number of Renaissance paintings. One of them is in the process of getting a facelift.

As we’re poking around in the foyer, a beggar woman who had been stationed outside the door comes in and begins plying her trade inside. But along comes a woman who apparently has some official capacity with the church, and yells at her to move along — the word “vai”, meaning essentially “get out” is not hard to understand.

We’re unable to go into the main part of the basilica, because there is a service in progress (How dare these religious folks hold masses in church that interfere with our tourist activities?)  and entering would be intrusive — this isn’t like Notre Dame, which is set up to have all kinds of people from from all over creation traipsing through even in the midst of religious activities. Nor are we able, to our disappointment, to view the miracle painting. But I did find a photo of it online.

(continued on next page)