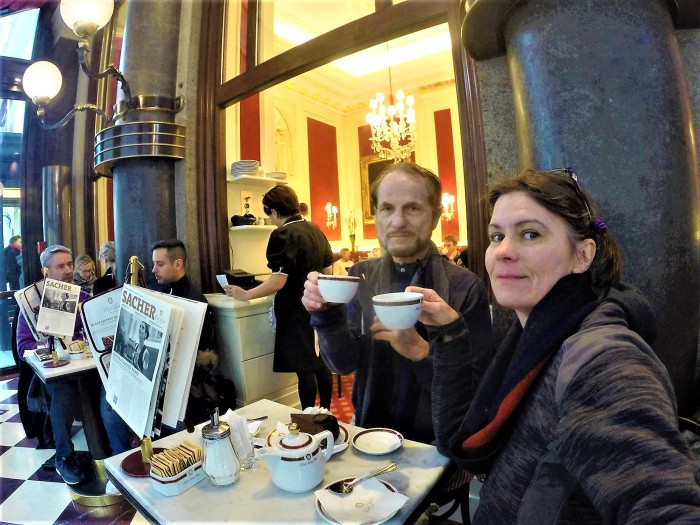 As usual, a cup of tea is the first order of business for me this morning. Down in the hostel lobby, there is a tiny kitchenette where I can heat some water for this purpose. (No, that’s not it in the photo above — we’ll get to that later.) There is also a refrigerator where guests can stash food branded with their names — except for one little section where they leave items they want to donate. (There is also a box of such items, nonperishable edition, on the counter.)

As I’m having my tea back in my room and we’re planning the day, we make the acquaintance of the Middle Eastern fellow stationed in the bunk by the window. He’s from Syria originally, though he’s lived many years in Vienna. More recently, he’d been working in Istanbul until the Turkish authorities discovered that his papers weren’t quite in order, so they deported him. He unwittingly became what Americans like to call an “illegal immigrant”. So now he’s back in Vienna, stuck in limbo in this hostel while he tries to sort things out, and with any luck get back to his job in Istanbul.

Since it’s a rather sunny day, we elect to ditch our heavy coats (made even heavier by all the gear crammed into their pockets and compartments) in a locker in our room, and bundle up with the rest of our clothing.

Around the corner, on a pedestrian mall, is a shop called Merkur, which is somewhat like Trader Joe’s. So we buy provisions for the day, then first of all head back to the train station to book our tickets for the next leg of our itinerary. We’ve been unable to do so until now, encountering unpredictable restrictions for what tickets can be bought for what destinations in what locations. But now we are able to get it taken care of.

Then it’s on to explore the city on foot, with a walking tour that I’ve loosely mapped out — that’s a switch, since Kimberly is the hardcore planner in the family, and I often like to just fly by the seat of my pants. The first stop is Belvedere Palace.

The Belvedere was constructed in the early 1700s as a summer palace for Prince Eugene of Savoy, and he obviously went for baroque. It’s now a museum, of course. We don’t go inside, as we only have a limited amount of time and a great deal of walking to do. But we figure that the grounds are as good a place as any to pause for breakfast. 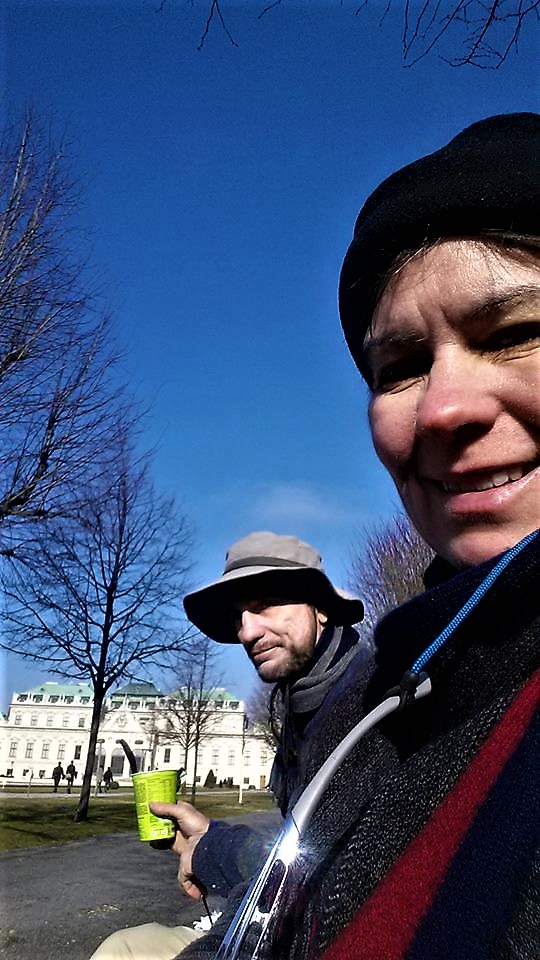 We also stroll through the statue garden, and as thespians, can’t resist auditioning for a spot.

The gesture is more historically significant than you may realize. In those days, the aristocracy sometimes hired members of the working class to pose as statues at parties.

Then it’s on to the heart of the city. Inevitably, we come to a statue of Vienna’s legendary 18th Century musical superstar, Wolfgang Mozart. 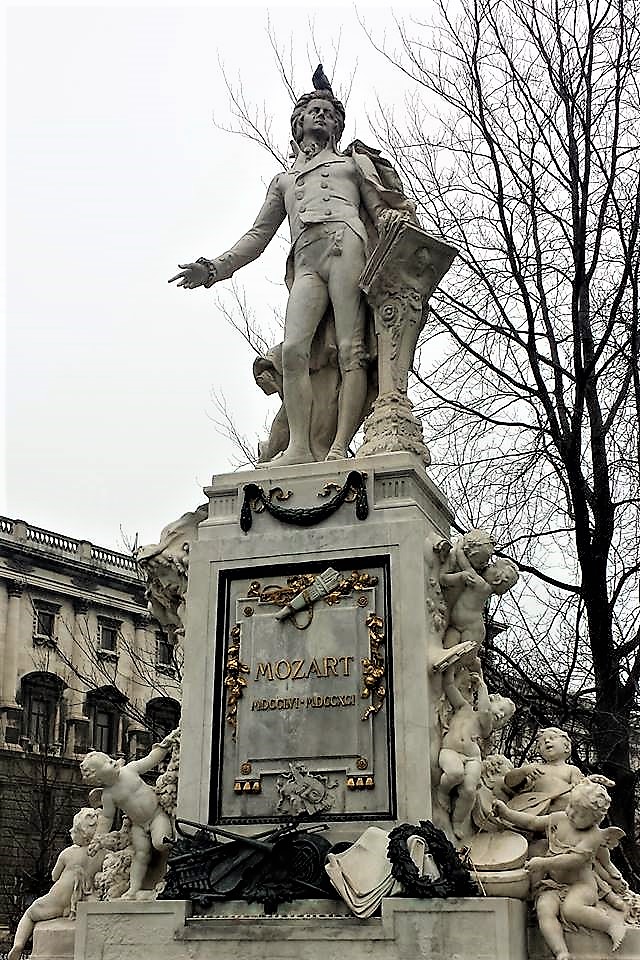 He was born in 1756, began composing at the age of 4, and had a profound influence on the history of music during his 35 years on the planet. For my money, however, even though his music unquestionably displays supreme technical brilliance, it’s often rather dull to listen to. The pigeon perched on his head seems to be delivering a similar assessment.

Mozart was the most prominent of musical geniuses to have spent time in Vienna, but there have certainly been many others. There’s even a Hollywood-style walk of fame honoring them.

One of them was Johann Strauss Jr., the “King of the Waltz”. Probably the most famous of his myriad waltzes is The Beautiful Blue Danube. These days, however, the Danube doesn’t seem to exhibit a great deal of either adjective he attached to it.

It has been an imposing presence since 1147, when it was consecrated. Exactly 7 centuries later — which is to say, 169 years ago — it figured in an iconic watercolor by Jakob Alt.

I pose beside it, as a sort of challenge to see which of us can look the craggiest. 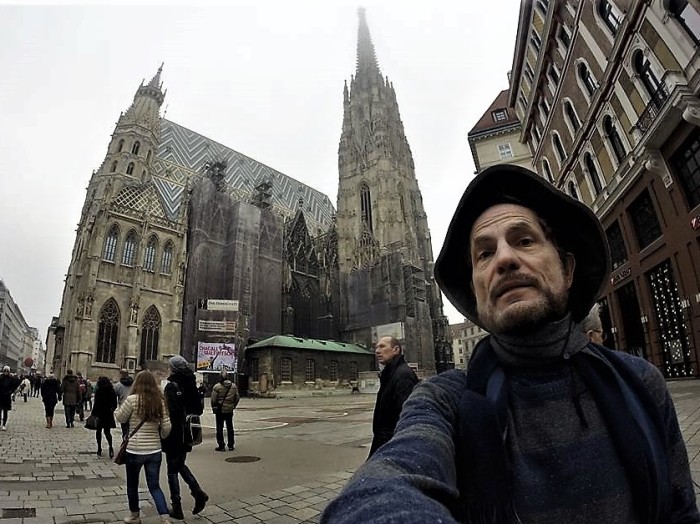 St. Stephen’s is where Mozart held both his wedding and his funeral. Between these two events, he served briefly as its music director. It was here that Beethoven realized he’d gone totally deaf when he saw birds fly out of the bell tower due to the bells pealing, which he did not hear himself.

The inside of the cathedral is as magnificent as one might expect, most notably its pulpit.

The architect who designed the pulpit, Anton Pilgram (ca. 1460 – 1516) is memorialized in a rather odd bit of sculpture that seems to portray him ramming his head through the wall in a “Heeeeere’s Johnny” fashion. 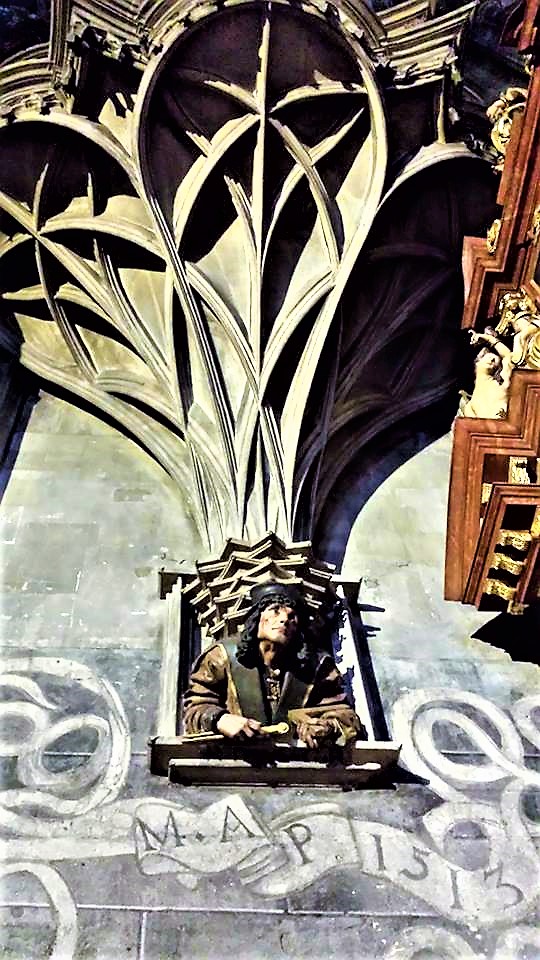 Just outside the cathedral is a huge plaza bustling with sightseers, shoppers, and other ne’er-do-well types. 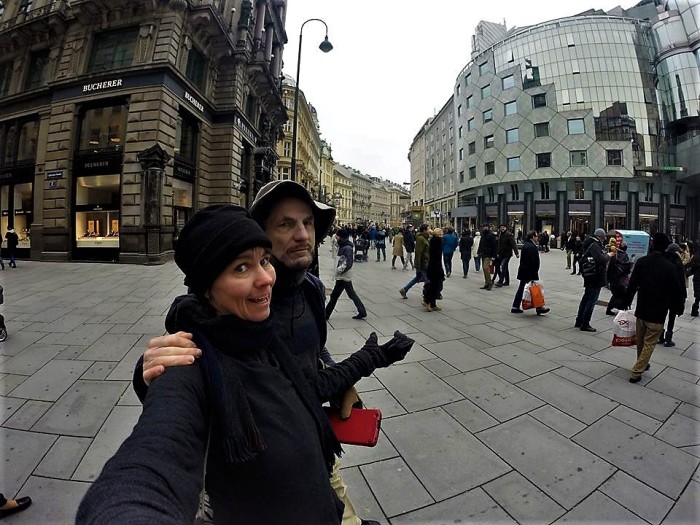 There are many shops and business that we duck into to warm up for a bit. Among them is a casino, though we don’t go past the lobby, since, as in Venice, there is an admission charged.

Next to St. Stephen’s is a sort of taxi stand for horse-drawn carriages, which seem to be rather popular here. On a day like this, we’ll pass.

The most interesting thing to me here, and perhaps in the whole city, is something that many people seem to breeze right by without paying attention to.

It’s a glass case containing an old tree trunk adorned with rusty nails, known as the Stock im Eisen (trunk in iron). It’s a tree that was chopped down in 1440, after having many nails driven into it as tokens of thanksgiving or wishes for good fortune. In those days, nails were very valuable, so sacrificing one was a much bigger deal than it is now. 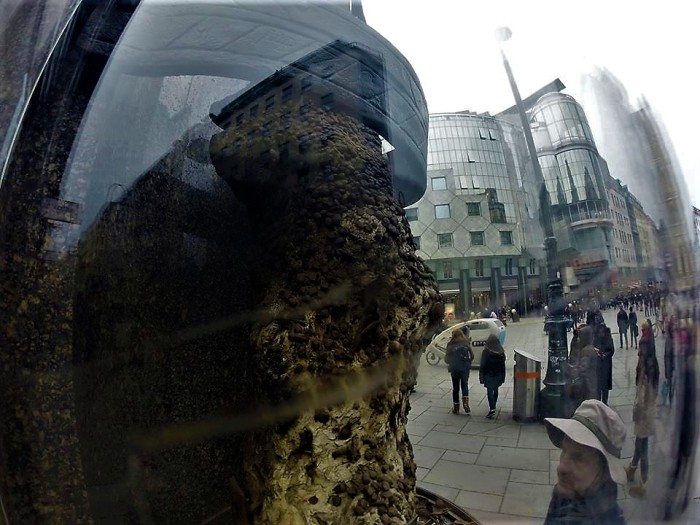 For some reason, I find this all immensely fascinating.  Maybe one reason is that there are so many legends surrounding the tree: it was placed in its iron bands by the Devil himself, who now guards it; it was placed in an unopenable lock by a blacksmith’s apprentice. And so on. Mostly, though, I guess it’s alluring just because it’s such an accidental relic of the past, in the midst of an array of carefully planned and expensively constructed architectural monuments.

One of the latter is the magnificent opera house, with its statuary of  mounted horses on the roof. 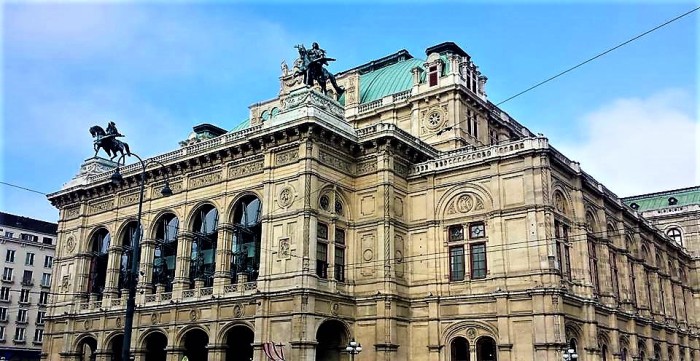 And a more enigmatic pink bunny at ground level. 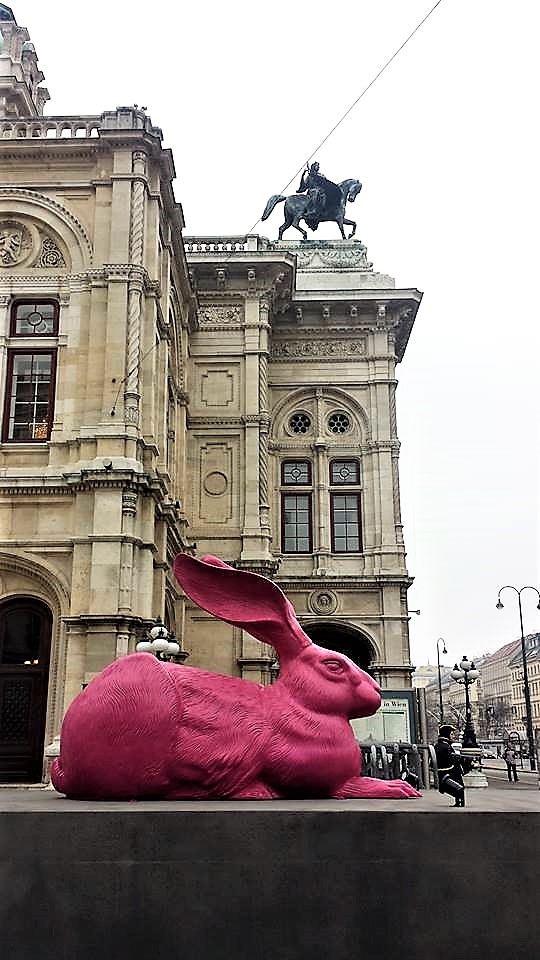 As we walk by, we encounter a young man trying to drum up business. He speaks English, and is dressed in the costume of an Eighteenth Century footman. There is, he informs us, a performance this very afternoon, and tickets are available. It actually would have been appealing if we’d had more time and a much bigger budget. (The only way I’ve been able to afford opera tickets in the past at a major house like San Francisco is to buy standing room.) But under the circumstances, we press on.

For the moment, there is a more important encounter awaiting us: the famed Sacher Cafe, located in the Hotel Sacher, just behind the opera house. The cafe and the hotel have been prominent Vienna landmarks since 1876, and have served a clientele including royalty, show biz celebrities, and American presidents. But the major draw has been around even longer: it’s the signature chocolate cake (Torte in German) that was created for a prince from a secret recipe by a 16-year-old chef in 1832.

No doubt like millions of other visitors, we order only the cake, and only a single slice to share, and only a pot of tea to wash it down. (I would have preferred to try out Austria’s decaf coffee, but coffee is oddly much more expensive than tea here, and Kimberly doesn’t drink coffee.)  The server probably sighs and rolls his eyes for the fiftieth time today as he sends our order to the kitchen, where they no doubt churn out the cakes by the crate. Have no fear, Herr Server, we intend to leave you a healthy tip.

Having heard so much about this legendary confection, we expected it to be cloyingly sweet — which is one reason we only spring for one slice. But it really isn’t that sweet at all. It’s just out of this world — a unique, indescribable, polyorgasmic, Gabriel blow your horn kind of flavor that makes the entire trip to Vienna worthwhile. But not to hype it or anything. 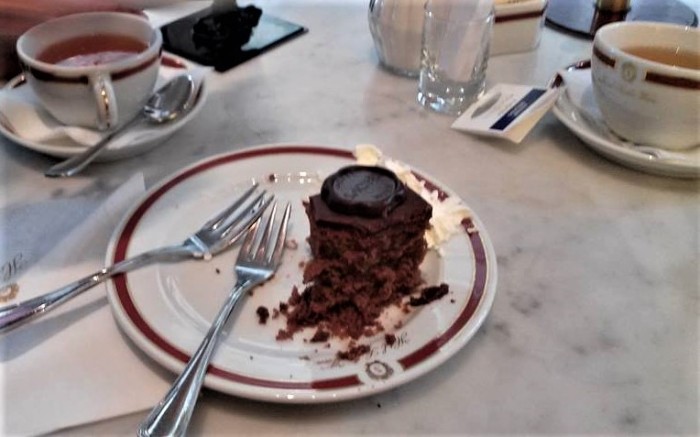 With the temperature growing more polar by the minute, and no chance that our coats are going to catch up with us any time soon, we finally decide to cut our walking tour short and make our way homeward. After a bit more exploration of the shops on Stephansplatz, where I buy a postcard to send my parents, and Kimberly buys a bar of chocolate to carry on her goal of acquiring one in each country (Vienna is almost as noted for its chocolate as for its music, but there’s no way this bar could do justice to the cake), it’s back to the hostel.

The street signs we encounter are rather more colorful and charming than the ones we know back in the U.S. And they’re often rather puzzling. One of them seems to be suggesting that there’s no square dancing allowed, but it’s okay to play soccer in the street.

Another seems to advertise a zone set aside for bicycles and pedophiles.

Even the Walk/ Don ‘t Walk signals are rather poetic. 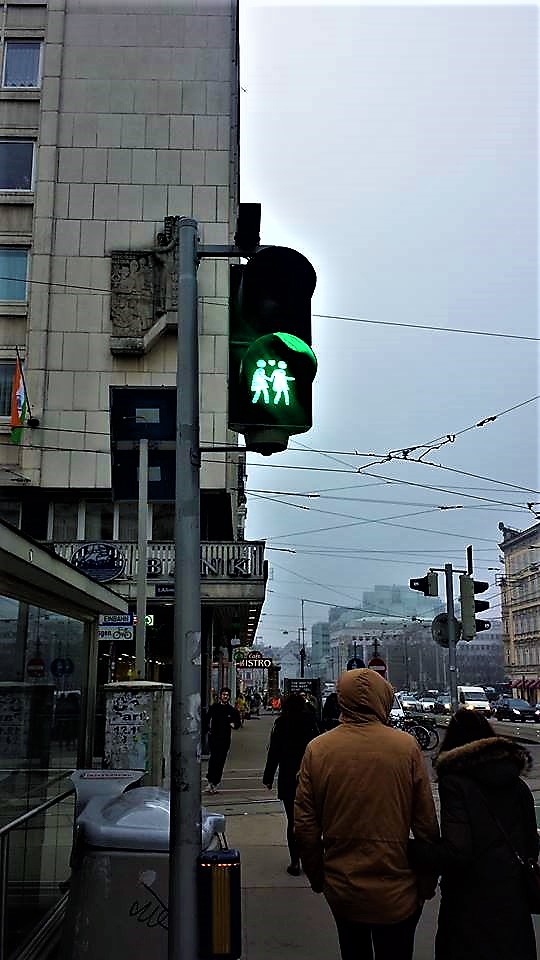 One of the establishments we detour into for warmth is a grocery market. There is a rather odd vegetable for sale that we can’t identify, so Kimberly starts to take a photo, but a store employee, apparently fearing that we’re about to commit acts of terrorism with the produce, tells her it’s verboten.

Passing a curious statue of a woman and children, we pause to look, noticing that the ground is strewn with (olive?) branches. A woman passing by stops and asks us if we know the significance of the statue. We of course reply nein, and she explains that this was the site of an apartment building that was bombed during The War, and the statue is to honor the victims.

Finally, not a second too soon, we’re back in our hostel thawing out. Some of last night’s roommates have vacated, so we are able to play musical beds and end up as bunkmates, with me being Kimberly’s upstairs neighbor.

Our tour of Vienna was rather brief, but we’re not complaining, as we originally hadn’t planned to spend any time here at all. Next time, we won’t trust our intuition about the weather. Tomorrow, we add another country to our list bucket. Tonight, we’ll dream of Sacher Torte.