So it’s a very early start this morning as Joost drives us to the Amsterdam Central Station. Seeing the city in the pre-dawn light of Sunday morning,  it feels positively apocalyptic in comparison to its beehive status we’ve seen before. We say goodbye, and then we’re back to spending half a day doing something we really love: watching the countryside zip by through the window of a train. 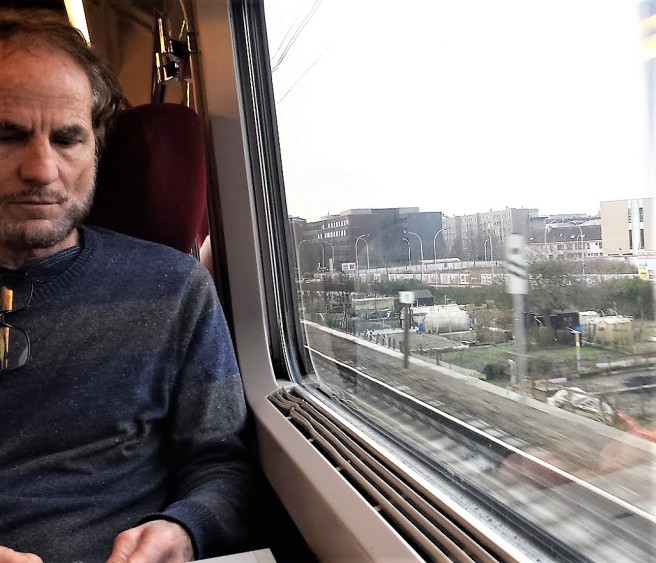 This train takes us through Belgium, the ninth country we at least have passed through on this trip. Unfortunately, we don’t have any layovers, so we have to settle for fleeting glimpses through the window of Antwerp and Brussels. 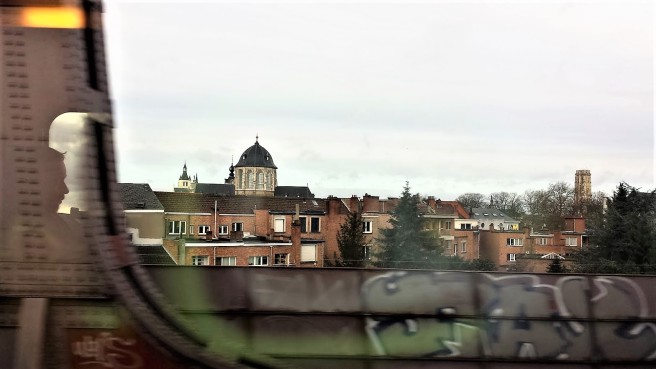 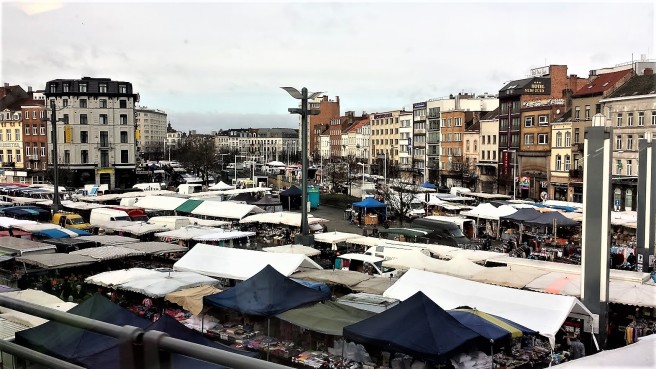 It’s a loosely packed train at first, and we have plenty of room to stretch out like slobs. But it picks up more and more passengers, becoming quite sardined by the time we reach Paris.

When we disembark at the busy Gare du Nord Station in Paris, there is a huge logjam of passengers on the platform as we try to exit. Finally we see why: the police have set up a checkpoint, possibly looking for terrorists. [A prudent measure, perhaps: this station would be the scene of a bombing only a few months later.] We flash them our passports and they wave us on through. Apparently it doesn’t occur to them that Americans can be terrorists too.

Then we are back once more on the jolly streets of Gay Paree. 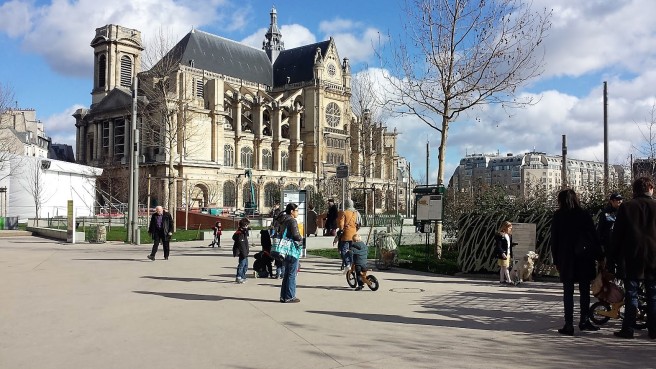 We stand in this queue for well over an hour. Or at least one of us does. Kimberly isn’t quite feeling up to par, so she sits out for a while while I hold our spots. At one point, my extra pair of pants slips out of the bulky jacket under which I’m carrying them, and I have to pick them up, dust them off, and re-position them in front of thousands of spectators. At least it wasn’t my underwear.

Finally, we’re inside, where it becomes apparent that the much-photographed glass pyramid out front is actually a glass diamond; when we enter the lobby, we go underground to see its underbelly. (It’s now officially impossible to see this thing without thinking of The Da Vinci Code.)

And then we’re off to ramble through one of the world’s greatest collections of art, ranging from the ancient…

… with even a few touches of modernity thrown in.

Our first priority, however, is to make our way as quickly as possible to the ultimate piece de resistance, the most famous painting on the entire planet: Leonardo’s Mona Lisa, which he worked on for several years somewhere between 1503 and 1517, and apparently left unfinished. It’s currently valued at somewhere near 800 million dollars — probably a bit more than he got paid for painting it.

Once again, we find that word has leaked out, and a lot of other people have showed up in line too. Why can’t the Louvre learn to keep secrets better? The worst part, though, is not the few minutes we have to wait to get a good look at it. The worst part is that we really can’t get a good look at it at all. Because the closest we can get is about 15 feet, not even close enough to admire the brushstrokes; for all we can tell, this just as easily could be a copy printed at Office Max. It’s kept isolated, under heavy security including bulletproof glass. (You may have heard that it was stolen back in 1911.) Still, it gives your goosebumps goosebumps to stand even this close to one of the most remarkable achievements in the history of the human race. 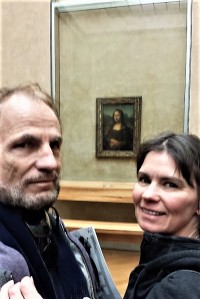 The Louvre also has work by one of Leonardo’s celebrated contemporaries, a fellow named Michelangelo, who was no slouch himself.  One of his most impressive pieces is The Dying Slave.

And there’s plenty of famous work by that prolific artist Anonymous, including the ubiquitous Venus de Milo, from sometime between 130 and 100 BCE. 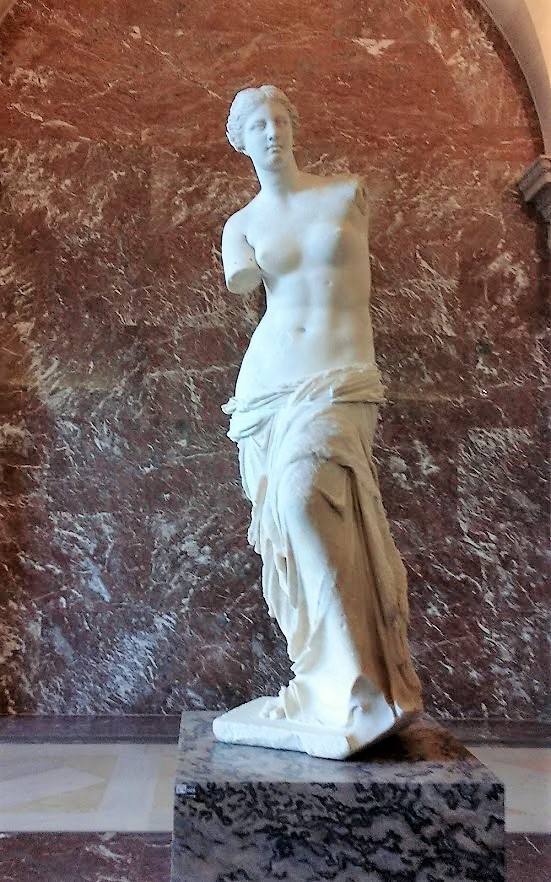 Another iconic ancient piece of sculpture on exhibit here is the Winged Victory of Samothrace (probably 300 to 200 BCE).

In addition to the fragmented main part of the statue, one of its recovered hands is on display.

And there’s way, way more than too much other artwork to digest in one day or even one lifetime. Not only on pedestals… 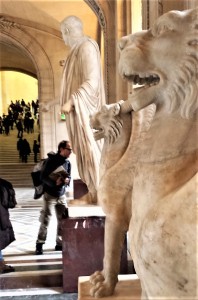 …and on the walls… 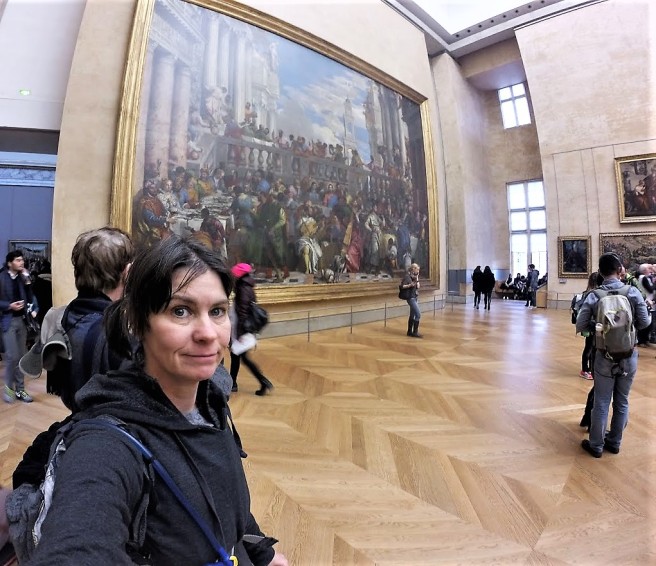 … but even on the ceilings.

(If you’re interested, I’ve placed more photos from inside the Louvre on another page.)

By the time we head to our home for the night, it’s already dark, though not really that late. We have a bit of concern about our accommodations, which we arranged through BeWelcome rather than Airbnb. The concern about lodgings arranged through a site like BeWelcome is that since people are offering their home for free, they generally do so with the expectation that you’re going to spend a certain amount of time socializing with them — which is certainly not a problem with us, up to a point. One reason we wanted to stay with locals over here is so we could become acquainted with some of them, whether we’re paying to do so or not.

And overall, we’ve been able to spend plenty of time with our hosts. (The one exception is the one near Naples with whom, we gather, we’d just as soon not spend time.) But we have the impression that many hosts on BeWelcome and Couchsurfing are hoping that people will spend the night bar-hopping with them or some such. And that’s just not our speed. Besides, we’re visiting Europe to see Europe, not to party or do things we could do back home if we wanted to.

Our one experience with BeWelcome so far turned out quite well. We stayed in Berlin with a host whom we enjoyed meeting and talking to, but we also had plenty of time to go out and explore on our own (well, plenty of time considering that we were there for only one day). This time, though, we have arranged 3 nights; and if we don’t have a good chemistry with the host, things could get rather awkward. It does sound promising, however; from the comments that previous guests have left on the site, he seems like he could be our kind of person.

Crossing over a rather odd little bridge, we find ourselves in his neighborhood. 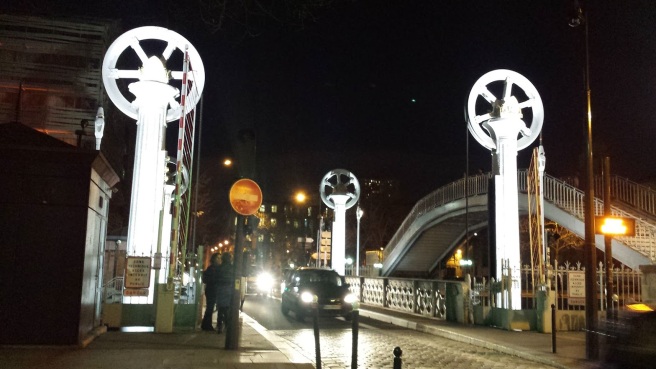 With relief, we notice that just around the corner from his apartment building is a large hostel. So if things don’t work out at his place, we can just go there.

Entering his apartment building, we ring ourselves up (using a code he’s given us) to the 29th floor, which offers a rather striking view. 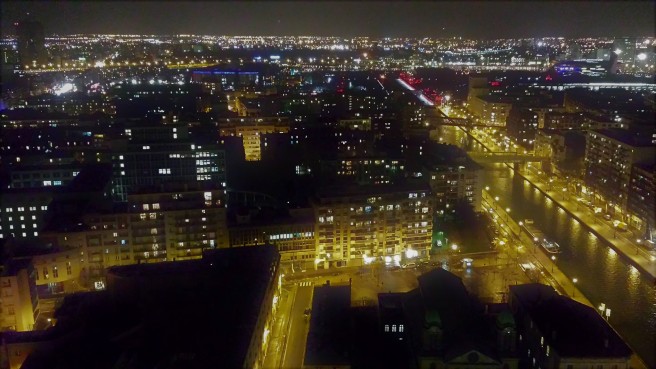 Then we ring the buzzer on his apartment and he lets us in, though he’s on the phone, and asks us to just wait in the foyer for a moment and he’ll be right with us. Shortly he finishes the phone call and comes over to greet us.

German by birth, Kim has lived in Paris for the past few years, working as a linguistics professor at the Sorbonne. His love of language and the thought processes behind it shows through in his conversation, which is rapid, lucid and fascinating. He immediately dispels any misgivings we had about our stay here not working out.

The apartment is rather small, but pleasant. It has only one bedroom, with the couch in the living room converting into a bed for guests. And it’s quite a comfortable bed, much more so than the Procrustean sofa bed we slept on in Torre del Greco. Altogether, this looks like a rather satisfactory base of operations for our final days in Europe.

About Us
Act!vated Theatre
We Volunteer
Newsletter Updates
Follow travel with a theatrical flair on WordPress.com