Our gracious host Jens has to go to work this morning, so we make an early start of it, having coffee in the kitchen before saying goodbye, hoping that we’ll be able to stay longer next time. Then we’re off to make our way eventually to the train station, where we’ll catch an afternoon train to Amsterdam. In the meanwhile, we have plenty of time to meander around Berlin a bit more on what seems to be the chilliest day we’ve had yet. (Vienna seemed just as cold, but that was because we made the stupid mistake of going out coatless.)

We pass an entire city block of what looks like a squatters’ village, a more permanent type of settlement than the tent cities we see in some American cities.

As well as something similar along the river that looks more like an artists’ colony. 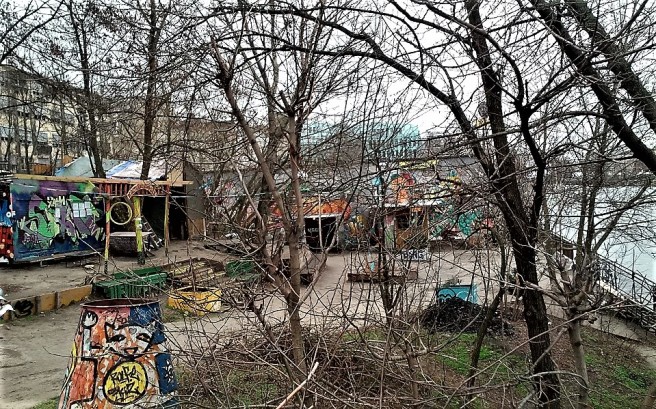 Passing along The Wall again, we come to The Oberbaum Bridge, completed around 1896 in a Gothic style. It once straddled The Wall and was a checkpoint between East and West Berlin.

The most famous checkpoint, however, is called Checkpoint Charlie. 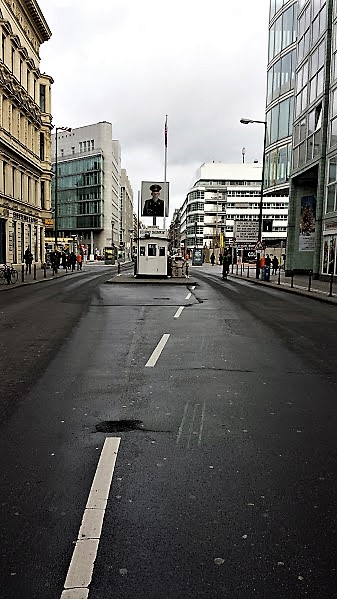 It was the scene of a 16-hour standoff between American and Soviet tanks in 1961, all prompted because of an American diplomat trying to get to the opera house in East Berlin (just goes to show you what a powerful force the arts are). 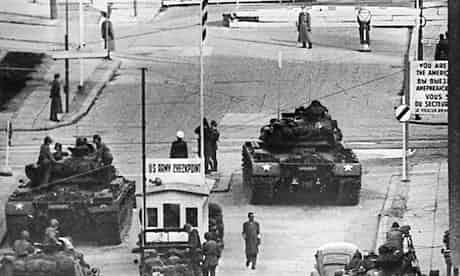 Today it’s the scene of a museum dedicated to The Wall, a replica of the guard house, and that inescapable perennial photobomber Ronald McDonald. 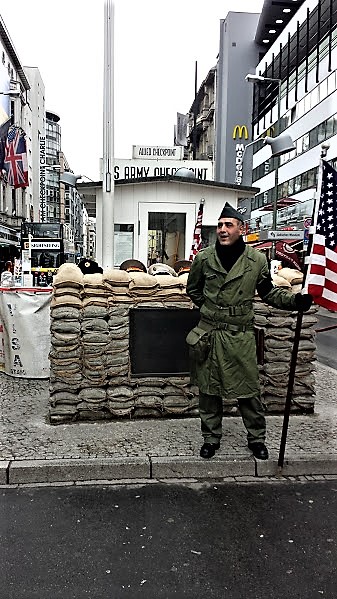 Actors pose in period uniforms of the American, German and Russian military. They even have extra coats and hats on hand so you can pose in them for a fee.

Around the corner is a gift shop called Noir Berlin, which does some rather conspicuous promotion.

Also nearby is a commercial building called the Axel Springer Haus, in front of which are busts of the three world leaders involved in the reunification of Germany after The Wall collapsed (which did not happen, kiddies, just because a U.S. president waved his arm and commanded it to).

Also not far away is an exhibit called Topography Of Terror, which displays the ruins of what was once Gestapo headquarters, before it got the crap bombed out of it. 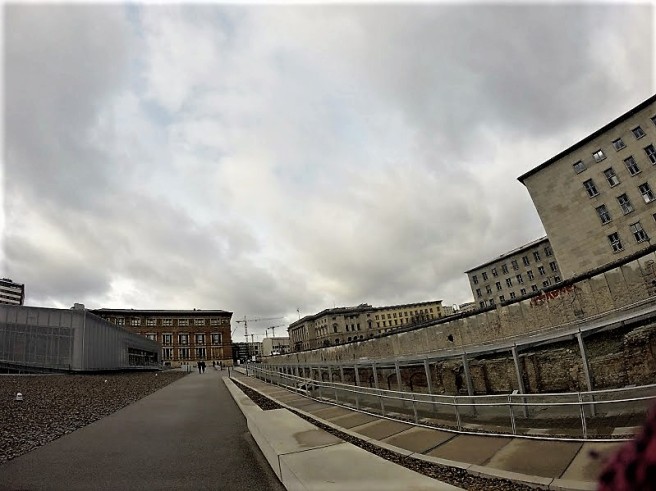 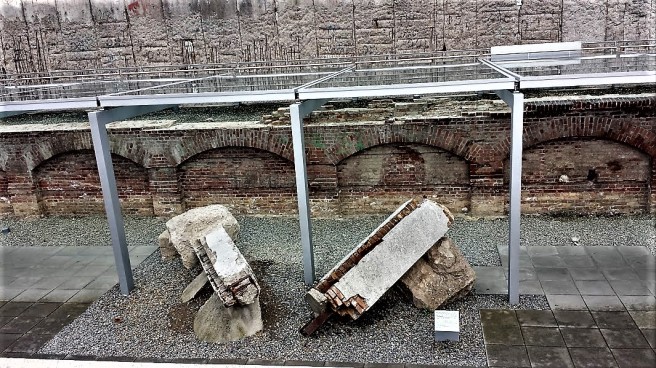 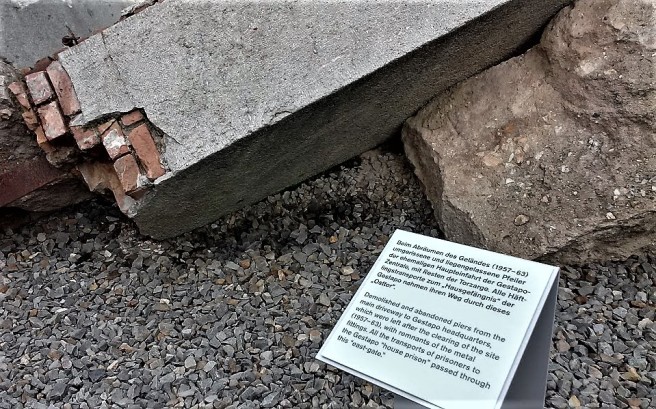 There’s something satisfying about seeing this kind of thing in shambles. Many tourists also seek out (as we’d thought about doing if the location had conveniently fitted into our tight schedule) the site of Hitler’s suicide bunker, which is now unmarked and paved over with a parking lot.

It must be rather annoying and tiring for Germans, and especially for Berliners, to be so associated with a man who is considered the ultimate incarnation of evil. But Berlin and Germany do their part to acknowledge and make amends for the damage done, as with this sprawling, haunting memorial to the millions of murdered Jews.

Soon it’s time to hike back past the Brandenburg Gate and the Reichstag Building to the train station.

There’s a warm and comfy lounge for first class passengers, and since our Eurail passes have been qualifying us for first class accommodations, we inquire at the entrance to see if we can take advantage of it. But no dice; evidently there’s first class and first first class. So we wait with the rest of the riff-raff in the open-air lounges that have hard seats and are not much warmer than the outside.

As the time nears for our departure to Amsterdam, we experience some confusion about where to go to catch it.

There has been a last-minute change from Track 13 to Track 14, which I fortunately spot posted on the electronic sign — it wasn’t announced on a PA system — and we dash upstairs just in time to catch it.

As we’re pulling out of the city, we pass a neighborhood that we wish we’d been able to see at close range — it looks rather like Greenwich Village in New York or Haight-Ashbury in San Francisco. Maybe next time.

A young lady comes around asking in German if we want anything to drink. I request a decaf coffee, expecting that it will be complimentary again. Instead, I’m billed for 2.90 euros. We ain’t in Krakow no more, Toto. Fortunately, it’s decaf and not caffeinated, because I’m feeling rather fatigued, and so I spend most of our remaining time in Germany doing something I almost never do. 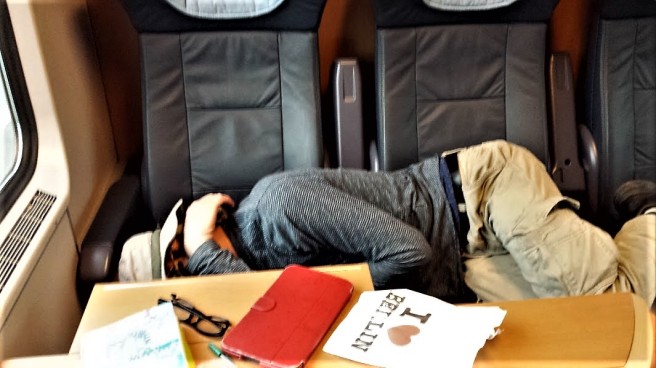 Before long, we’re in The Netherlands, which many people wrongly call Holland. Well, it isn’t all that wrong, actually. Holland is a region of The Netherlands, the region that Amsterdam is located in, and the name Holland is sometimes used informally to mean the whole country, apparently even by its residents. And just to make it more confusing, the language they speak is Dutch, which doesn’t sound like either name. Fortunately, they also speak a lot of English — I’ve read that 95 percent of Amsterdam residents speak English, the highest of any European city where it’s not the native tongue.

This tends to make real estate rather scarce, and priced accordingly.

So we again found lodging outside the city, in the town of Beverwijck. Our Airbnb host, Joost, picks us up at the station and takes us to his house. He is, or was, an insurance broker, but he lost his job two days before Christmas. He says he was the victim of downsizing brought about because so many people these days buy insurance online. This brings a slight twinge of guilt, as we have done this ourselves. It’s just cheaper to cut out the middle man. Sorry, Joost.

When we chat with him about our plans for our brief time in Amsterdam, he laughs and says, “You Americans. You all think you can do everything in one day.” I assure him that this is not the case with us; as with the other places we’ve visited, we just hope to get an overview to have a better idea what to explore in more depth in the future. But he probably has a valid point about most American tourists.

Our room is upstairs by the shower, and it’s equipped with an electric tea pot and even some tea bags. The only drawback is that the closet has a sliding door, which is rather noisy, and we’re afraid it might disturb Joost, as his room is apparently next to ours.

After we’ve unpacked, I go down to the kitchen and cook dinner. It’s clear that Joost speaks English very well, because he’s watching Monty Python and cracking up at every gag.

Kimberly ends up not eating dinner, because she’s not feeling well. But hopefully, after she gets a good night’s sleep, she’ll be all better in time to conquer Amsterdam tomorrow.