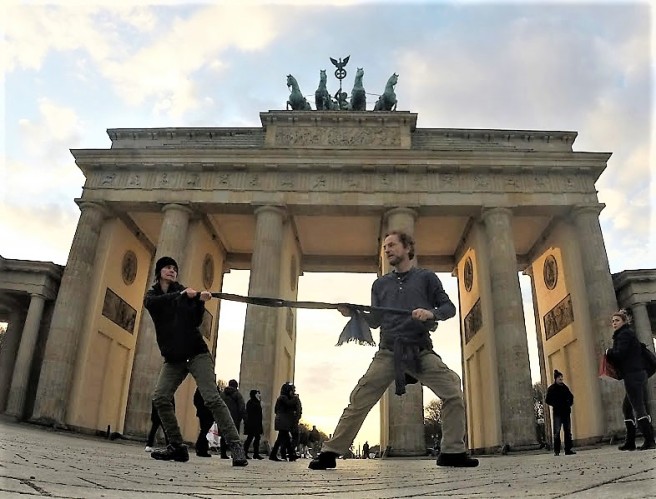 Up fairly early this morning, we reluctantly say goodbye to our cozy cabin on a riverboat on the Vistula. The lady at the front desk, who has been here during most of our stay, asks us if want breakfast before we leave. We politely decline and I tell her goodbye in a canned Polish phrase picked up from an online audio. I must have said it better than I thought because she, apparently assuming I actually know a little Polish, fires something back to me. When I indicate that I didn’t quite fully catch her drift as such, she translates: “Thank you for staying, and we hope to see you again.”

Realizing that we haven’t allowed as much time to get to the train station as we should have, we dash back through Old Town and the rest of this fantastic city at a brisk pace, sometimes even jogging. But we make it in plenty of time to catch our train, and Kimberly cozies up in her seat with her bar of Polish chocolate that she has added to her already diminishing collection. It bears the name Wawel, as in the hill and the castle and the cathedral. 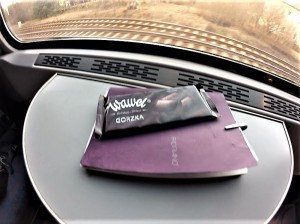 While nearly every place we have visited in Europe has been incredible, Krakow has especially wowed us and exceeded our expectations. It is in fact our favorite of the cities we have visited so far. [And it will continue to be.] To top it all off, it’s been amazingly inexpensive. Initially withdrawing 300 zlotys (about 75 dollars) from the bank, figuring that we’d be needing to get more for our 3 days here, we instead have zlotys left over to take home as souvenirs.  That doesn’t include our lodging, which was paid in advance, but it does include food (including a fine meal at a restaurant), train fare to Auschwitz, and gifts. Krakow is really a great deal. (Shhhh!!! Don’t tell anyone. We don’t want to see it overrun with tourists the next time we’re here.)

The train trundles along through farmland and villages, and into Warsaw, which we wish we could spend some time in. We are joined in our compartment by a friendly Polish couple.  The woman, named Kat, speaks English rather well; the man hardly speaks any English at all, though he says (in Polish) that he understands it better than he can speak it. She and Kimberly hit it off so well that they decide to become Facebook friends.

Finally we are in Germany, and then we pull into Berlin.

It’s only early afternoon, and our host for the night won’t be home from work until evening, so we have a few hours to explore Berlin. Close to the train station is the Reichstag Building, built in 1894, the home of the German parliament. 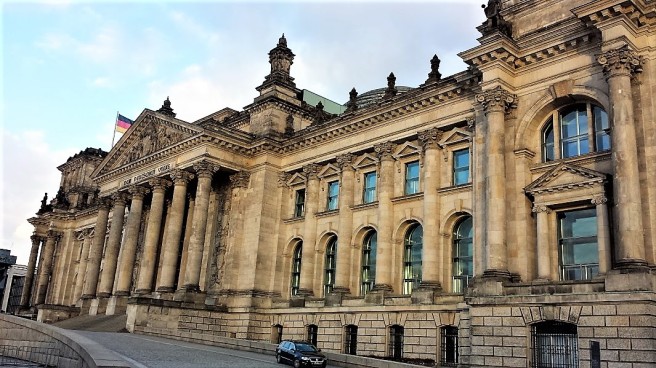 The inscription on the front reads Dem Deutschen Volke (to the German people).

The glass dome on top offers, for a fee, a panoramic view of the city.  But it wasn’t worth it today with such poor visibility. 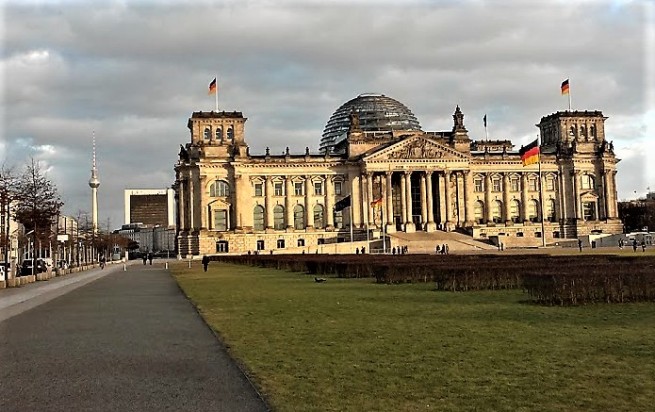 Also nearby is the Brandenburg Gate,  built in 1791 and one of Berlin’s most famous landmarks and strategic/ symbolic locations.

The notorious Berlin Wall once ran right by here. It must have been an odd sight for such a richly ornate gate to point to the dead end of a drab wall a few feet away. 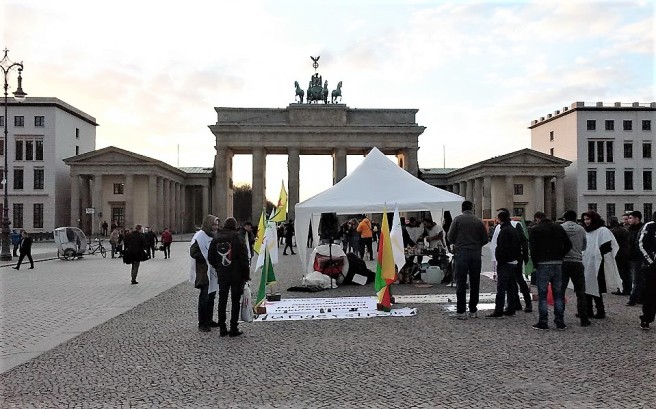 We spot a few other older structures too, but most of what we see is more contemporary. In fact, despite being some 800 years old, Berlin is by far the most modern-looking city we’ve seen in Europe. Maybe because so much of it was destroyed in The War, as it so often is called. 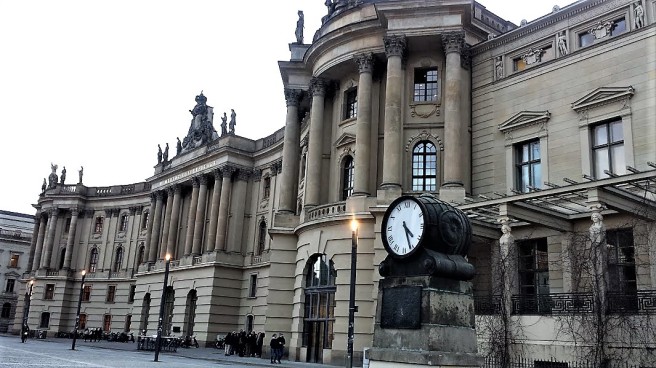 Construction abounds everywhere. It still looks very much like a city being rebuilt. 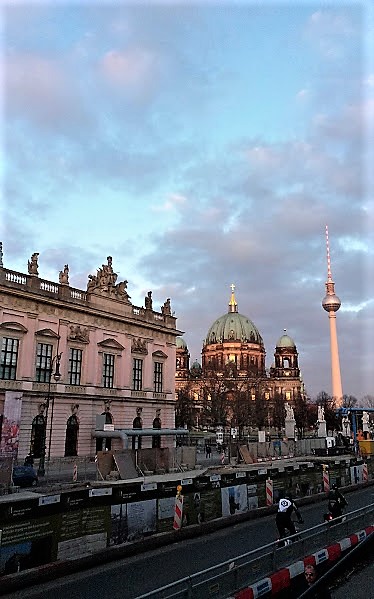 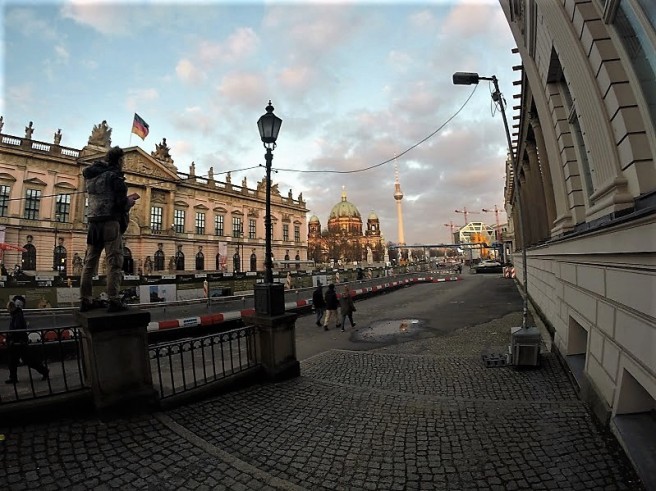 Some of the newer architecture is just a bit unorthodox.

The most curious thing by far, however, is the network of brightly colored pipes you spot all over the place, looking as if they’re part of some avant garde art installation. 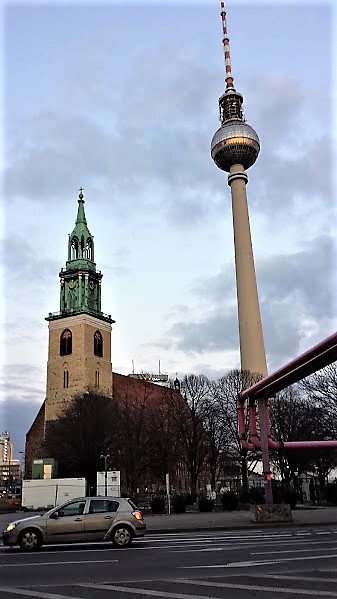 From what we gather, the pink pipes pump ground seepage away from construction sites, which is necessary because Berlin is built on marshland. And the other pipes carry fresh water, fresh sewage and gas. 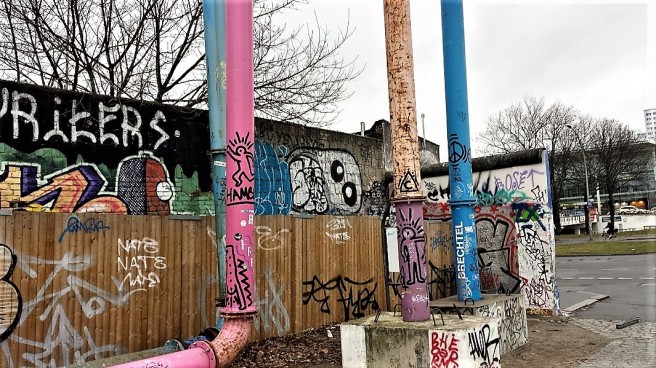 Among other places, they can be found by what is now called the Eastside Gallery. It consists of a few remaining segments of the Berlin Wall that were left up so they could be a canvas for art and expression. 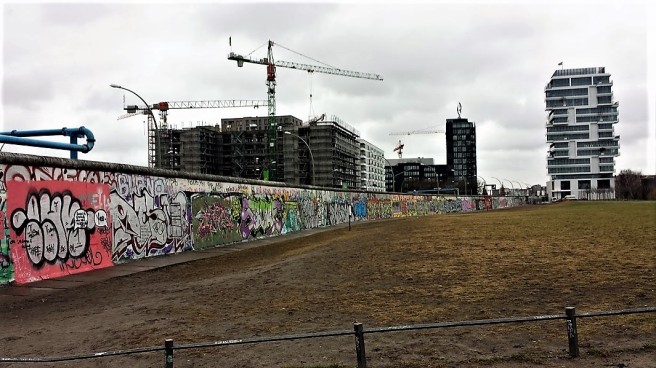 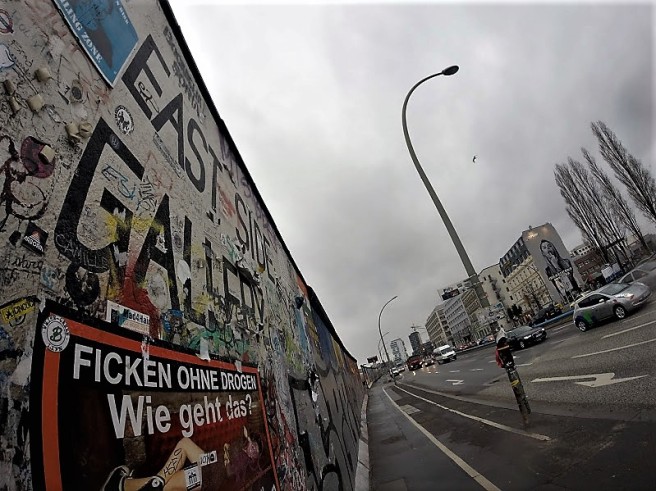 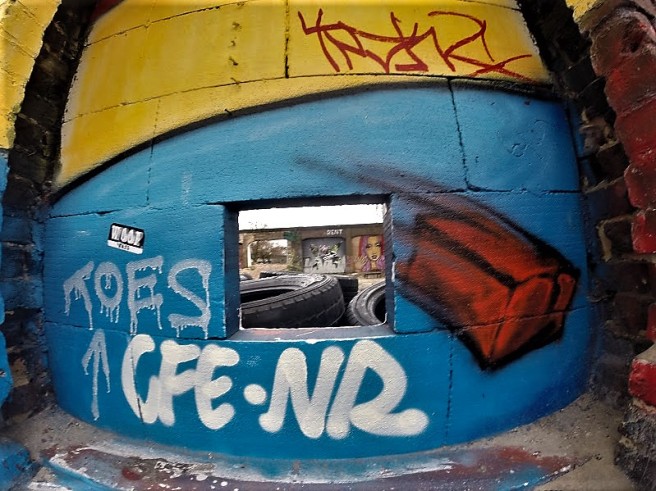 The one by the Mercedes-Benz Arena has a plaque explaining why it’s here. It was dedicated to Berliners by Eunice Kennedy Shriver. So don’t say a political figure never did anything worthwhile. 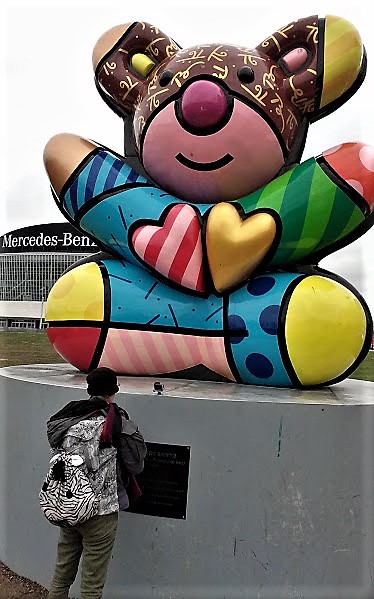 Most of these bears are kinda cute. But the one in the window of the U.S. Embassy, which looks like the offspring of a grizzly and the Statue Of Liberty, is frankly just a tad creepy. 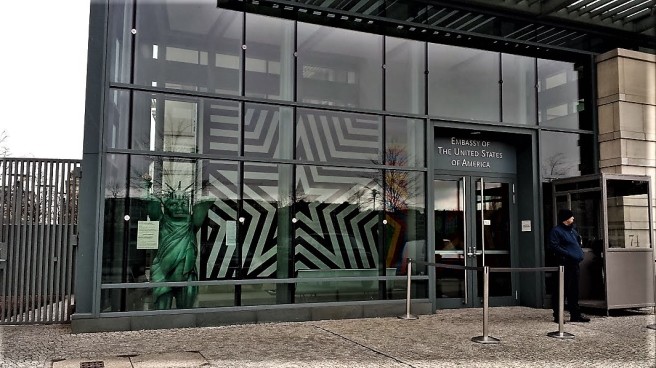 Finally it’s time to catch a train to our host’s house, about 30 minutes away. Entering the station, we try to make sense of the schedules and fares, and a young man comes to our aid. He ends up giving Kimberly a ticket he had left over.

On the train, I resurrect my long-decayed German to ask a lady if this train goes to the neighborhood we’re seeking. She applies in the affirmative. And then I start thinking that maybe my grammar wasn’t entirely accurate. But Germans no doubt are quite accustomed to Americans mangling their language, especially since German grammar is so dang tricky. (It’s been widely reported that JFK’s famous utterance “Ich bin ein Berliner”, because of its inclusion of the indefinite article, actually meant “I am a jelly donut”.  That’s true in certain parts of the country outside Berlin, but the sentence is also quite legit the way he intended. His pronunciation is another matter.)

The neighborhood we land in is rather bohemian, and much to our astonishment has a number of vegetarian and organic restaurants and food shops. One always thinks of Germany as a bratwurst and wienerschnitzel culture — hey, hamburgers and frankfurters were named after German cities. But in this part of town at least, there is a health-conscious, sustainability vibe that you’d more expect to see in Berkeley than Berlin. There’s even a sign on a store advertising, I kid you not, “organic shoes”. (Do they do the walking for you?)

We’ve also noticed that like Vienna, Berlin has walk signals with character. 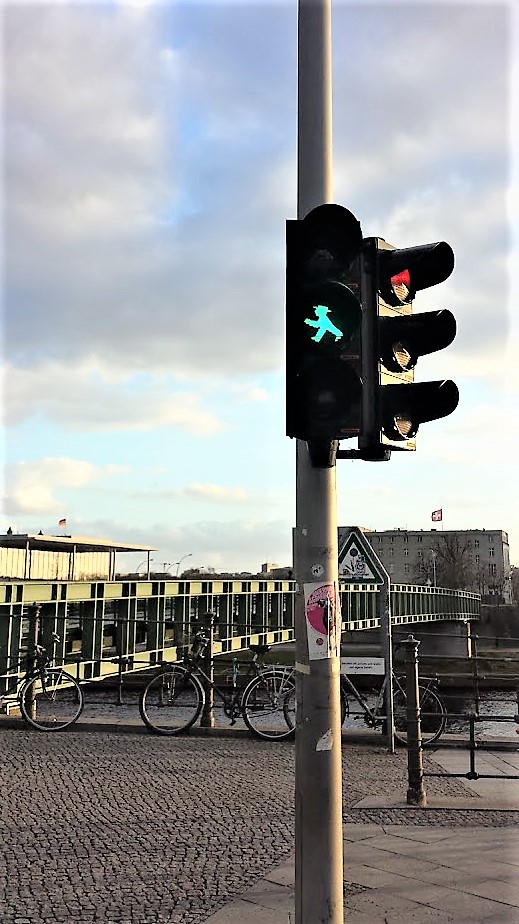 They even have a name for the character: Ampelmann. 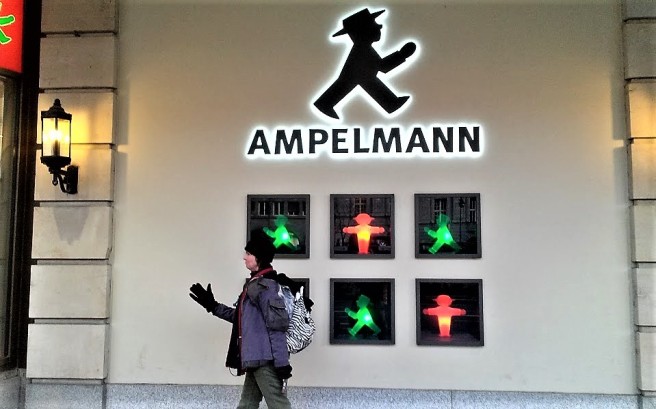 When the time of our rendezvous approaches, we seek out the apartment building of our host and wait by the front door.

When we first began planning this trip — only a few short weeks ago — we decided that, being on a budget, we should try to arrange free lodging whenever possible. So we first joined Couchsurfing, an online organization designed to match up travelers with hosts willing to put them up for a night or two. But we got no results at all. Most of the people we wrote to didn’t even respond, and the ones who did turned us down. (One school teacher in Paris, however, offered us the grand opportunity to do a free show at her school.) Furthermore, Couchsurfing itself has reportedly gone downhill in recent days, and is sounding more and more like a rip-off. It even offers members the opportunity to be “certified”, which basically just means paying them 20 bucks for nothing.

With our departure date fast approaching, we had to give up that pursuit for the first part of our tour and book accommodations through Airbnb and hostels. But for the second part, we decided to try some alternatives to Couchsurfing, the most prominent of which is BeWelcome. And this time, we got favorable responses. One of them is the fellow we’re staying with here tonight. Another is a 3 night stay when we return to Paris. And we also received an invitation in Krakow, though by then we’d already booked the hostel on the riverboat. Moral of the story: forget Couchsurfing and go with BeWelcome. (Many hosts and travelers listed on BeWelcome report that they previously were listed on Couchsurfing, but became disgruntled and switched over.)

Soon our host arrives on his bicycle. He is Jens, who works for the German government as a diplomat. (He’s amused when we tell him that we call him “the spy” and says “Uh-oh, you know my secret.”) You’d never suspect such an occupation; he has the look of a rugged outdoorsman, and indeed he is, being a skiing buff among other things. He’s a very congenial, likable fellow.

He has to go out for a while to attend, of all things, an improv rehearsal. This is the second time one of our hosts has done this. So while he’s gone we have dinner and settle into our compact but comfortable quarters.

When he returns, he suggests going out for a beer and, for him, a veggie burger at one of those quaint little cafes nearby. I ask the girl behind the counter if they have a stout or porter, and she replies no and adds, “You won’t find much dark beer in Germany”. This really floors me. As far as I’m concerned there are two types of beer: dark beer and all that other stuff. And since Germans love their beer the way Americans lover their guns (except they don’t have wackadoos in camo running around proclaiming they have a constitutional right to be loaded) you’d expect them to offer a full color palette. Anyway, the beer I do have is excellent, and those veggie burgers look mighty tasty.

Back at home we sit and talk some more before bedtime. Jens is especially fascinated by the American presidential election, now in its primary stage. (Primary stage is a phrase applied both to presidential elections and diseases.) We, however, are rather embarrassed by it. [We couldn’t possibly imagine just how embarrassing it ultimately would become.] It’s understandable that he would take an interest in this topic, since he himself is a government official. Even so, talking to him I get the impression (and by no means for the first time) that the average European knows considerably more about world events, and even U.S. events, than does the average American.

At one point I mention to him how I’ve noticed that Europeans seem to smoke much more than Americans do these days. And after a time he says, “Well, I’m going to do something very European. I’m going to step out on the balcony for a cigarette.”

And I, who rejoice at every new anti-smoking law, I who have been known to scold people for smoking in places where it’s prohibited, I who have not kissed a cancer wand myself in literally decades — I step out on the balcony with him and torch a coughweed myself.

It is a vacation, after all.