It’s one of those things that you know isn’t going to be a great deal of fun, but you feel that you have to do it anyway. Especially being this close. You have to go pay a visit to the former site of the infamous concentration camp known as Auschwitz. It’s only about an hour’s train ride from Krakow.

Heading back through Old Town, we pass the dragon again. He was apparently out of sorts yesterday, and couldn’t get his pilot light going. Today, there are three municipal workers trying to reignite his flame. We approach them and ask them if they can speak English, to which they reply in the negative. We try to make them understand anyway that we are American actors who have come all the way over here to see this dragon breathe fire so we really hope they succeed. They politely indicate that they haven’t a clue what we’re trying to say.

So on to the train station.

From which a train takes us to the town of Oswiecim.

A short walk from this station is the first of the Nazi concentration camps to be called Auschwitz, which is the German equivalent of Oswiecim. Also within walking distance is Auschwitz II, commonly called Birkenau, which was the site of the gas chambers and crematoria where so many prisoners were exterminated and disposed of. We’ll reserve that lovely experience for a future occasion.

Walking to the site, we pass a sign that seems to announce that just ahead are parking, dining, bathrooms and… showers??? (We can’t resist some dark humor about hoping that the showers actually dispense water.) 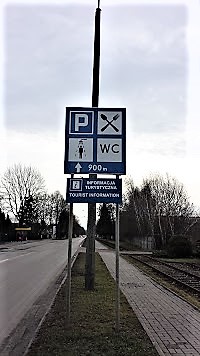 Admission to the site is free, but guided tours are available for a fee. With limited time, we opt to explore on our own. Passing through security, we encounter, as we always do, a great deal of curiosity about our jackets laden with cargo. As we take them off and put them through the scanner, I comment to the guard that Kimberly made them, and she indicates that she is quite impressed.  She asks us if we’re going to take a guided tour, and when we reply in the negative, she gives us a list of about half a dozen buildings (including 3, 4, 5, 6 and 12) that we should be sure to hit because they are especially important. Lacking any other knowledgeable recommendations, we do just that.

First, we stroll through the notorious gate with the iron sign above it ironically declaring Arbeit Macht Frei  (Work makes you free.) 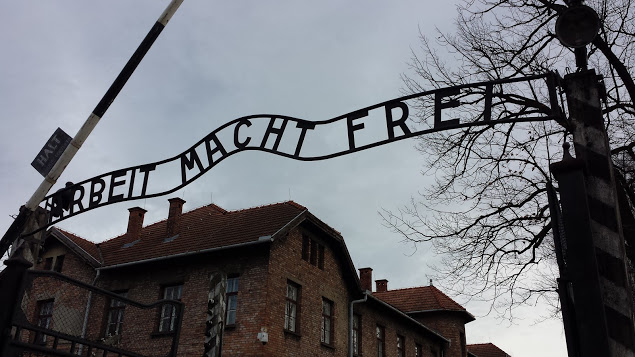 And then we get the chilling landscape that greeted arrivals on the packed trains — minus guards, dogs and emaciated inmates. 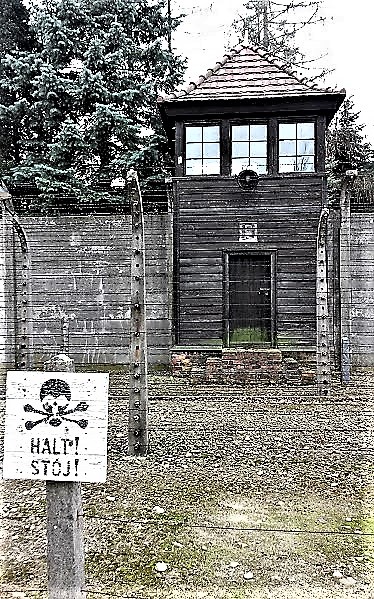 One courtyard was an outdoor chamber of horrors where prisoners were executed by firing squad, beaten, or left chained indefinitely in painful positions 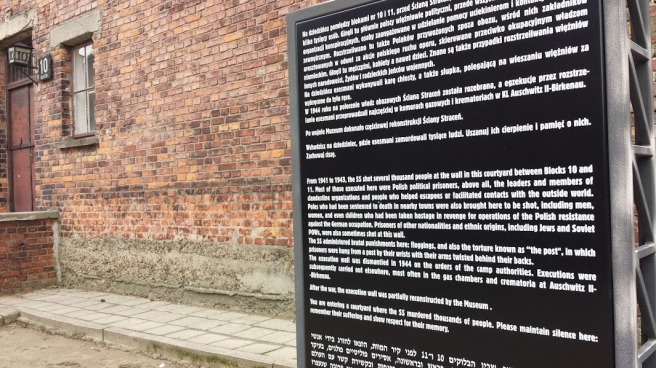 Why maintain a museum like this commemorating these horrors? Why tell people about what we have seen? Very simple. It’s a truism that has become a trite-ism, a saying of George Santayana that inevitably ended up on a wall here: “Those who cannot remember the past are condemned to repeat it.”

The exhibits in the buildings include items taken from the prisoners. One such room contains their hair, which was cut off and used to stuff mattresses, etc. An entire room, behind glass, filled with truckloads of human hair. A sign asks us not to photograph it, and we respectfully comply. But we are permitted to photograph some of the other haunting items taken from the victims. 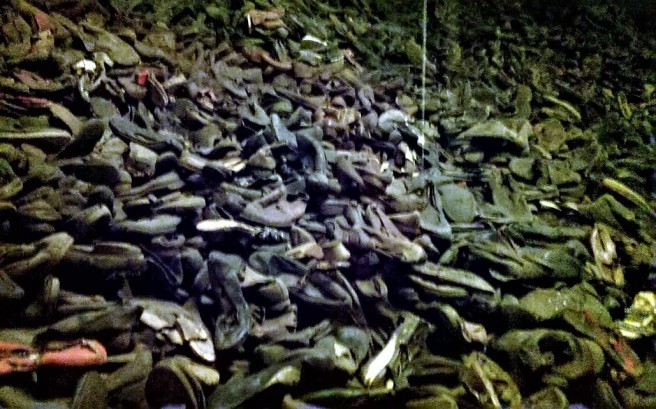 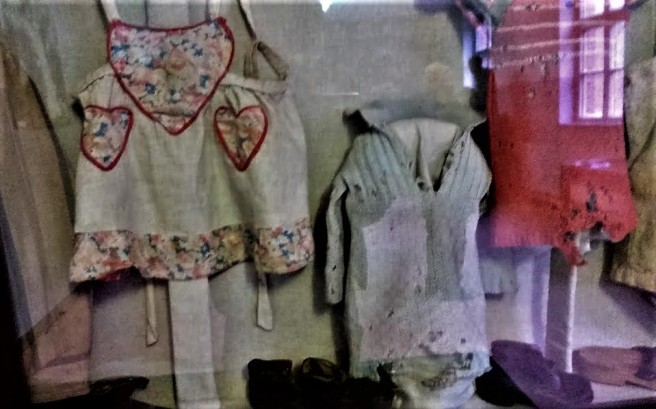 There’s also a room filled with canisters that once contained Zyklon B, the pesticide that was used to execute prisoners in the “showers”.

There are also photographs.

Including one of three naked Roma children, horribly thin, who had been used for medical experiments. I can’t bring myself to photograph it.

Another one, however, I do photograph. In a way, it’s the most disturbing of all. It depicts the “selection” process.  Nazi troops are examining new arrivals to the camp, and deciding which groups they will be separated into — some to be killed immediately, others to be worked to death — as casually as if they were deciding what to eat for breakfast. 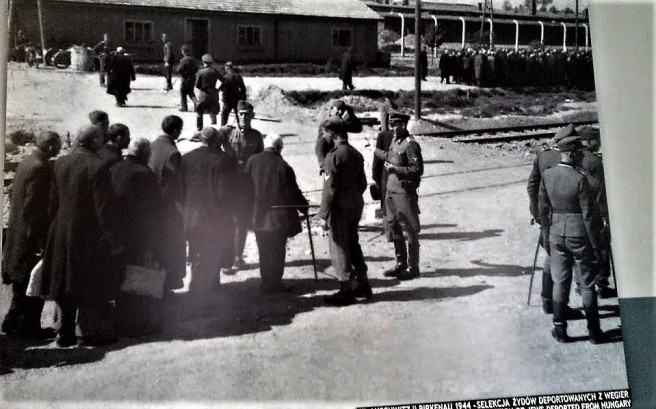 The banality of evil embodied in this photograph is a reminder that evil on such a massive scale is not carried out by people who intend to do evil. On the contrary, it is carried out by people who firmly believe they are right — who indeed are obsessed with being right. To such an extent that they blindly follow a cultish figure who is willing to tell them that they are right, and anything else they want to hear. From there it’s a very short step to targeting entire sectors of the population as scapegoats for anything and everything that has gone wrong.

In Building 6, Kimberly gets a bit of a jolt.

The walls are lined with mug shots of prisoners, hundreds of them. In the beginning, the Nazi bastards photographed all incoming prisoners. But apparently overwhelmed by the task, they abandoned it.

One reason she wanted to come to Poland is because her (adopted) family has roots here. She’s been researching the family tree, and has discovered some gaps and mysteries. After spending quite some time perusing these mugshots, she was just about ready to leave when the names caught her eye.

That was her great-grandmother’s name.

And there are three of them here, apparently a father and two sons. They were arrested on the same date, and all died within a few months of each other. The names and dates indicate that there may be a connection to her family.

[Spurred on by this trip, she plunged into genealogy more deeply than ever after returning to the States. And she ended up identifying first her birth father and a few months later, her birth mother. Her father is now deceased, but she’s met several relatives on that side, and recently met her mother.]

Finally, the time comes to catch the train back to the splendid city of Krakow, where we kick up our heels one more time.

Our amblings take us to Kanonicza Street, to the former home of John Paul II.

In those days, he was known as Karol Wojtyla.  And in addition to being a priest, he was a poet and playwright. He wrote a little play about the challenges of marriage called The Jeweler’s Shop, which had its Western U.S. premiere in San Francisco in 1982. And I was in the cast. It was, in fact, my first paid acting gig. 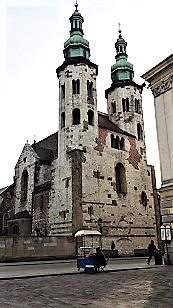 Night comes, and casts the city in its usual magical web. 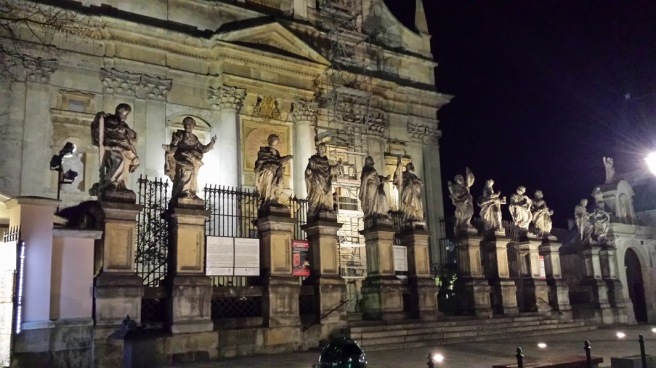 Even the dragon is breathing normally again.