Our host Kim gets back this morning just as we’re getting up and stirring. He takes a nap for an hour or so while we pack our things, then he gets up to see us off. We exchange hugs, and promises to keep in touch. (He is one of the few human beings on the planet who is not on Facebook, but we do have his email.) Then we say goodbye to him and our apartment on the 29th floor.

And we’re off for one final stroll through the streets of Paris. 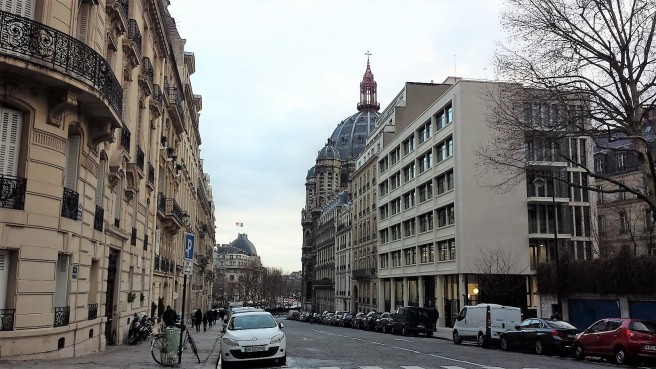 Kimberly finishes off her visit to France the same way she began it: with a fresh baguette.

Our destination is the bustling Gare du Nord train station.

Where we catch a train to De Gaulle Airport.

About the time we arrive at the airport, we receive a message from Kim asking if we still have the keys. Oops. Turns out we do. I thought Kimberly left them, and she thought I left them. Not to worry, Kim tells us that there is a post office in the airport and we can buy a little box there to ship them in.

So after we find our departure gate, Kimberly plunks down to wait while I find my way to the post office. It turns out to be ALL THE FRIGGIN’ WAY ON THE OTHER SIDE of this huge, huge airport. And when I get there, there’s a lady ahead of me who seems to be well acquainted with the lady behind the counter, and they have a marathon gabfest while I’m chomping at the bit. Finally, I get the keys shipped off, and with any luck Kim will have them tomorrow.

Then it’s deja vu all over again as I make a mad dash back to our gate where Kimberly is waiting anxiously, and the plane is already boarding. But I actually don’t cut it quite as close as I did in Washington on the way here.

And we reluctantly say au revoir to France.

And head back to our first pit stop, Iceland. 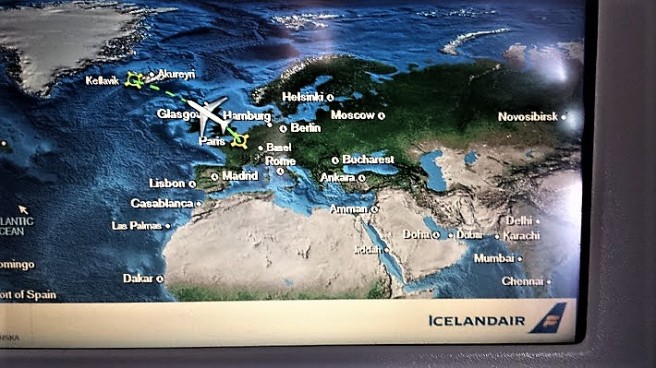 Where we land at the major international hub of Keflavik International Airport, just outside Reykjavik.

This time, we have some time to spend in Iceland, but we can’t get out and see anything. All we can do is browse in the gift shop.

Where Kimberly latches onto an addition to her international chocolate arsenal.

I try to fill my empty water bottle, but discover that there are absolutely no water fountains in this airport. Anywhere. Really. I’m told that the only place to get drinking water (besides buying another bottle from the gift shop) is the bar. So I go to the bar, and ask the bartender if she will fill my bottle. She answers in the affirmative, but takes her sweet time getting around to it, tending to the paying customers first, and perhaps hoping that if she tarries long enough, my thirst will grow so ferocious that I’ll shell out some cash for something a bit hairier than H2O. (If so, it doesn’t work.) In the meantime, I am regaled by a man standing by the bar, drink in hand, who is in a very gabby mood and has zeroed in on me as his anointed audience.

Finally I get my water, and after the plane’s wings are de-iced, we are airborne once more, and headed back to the U.S. of A. 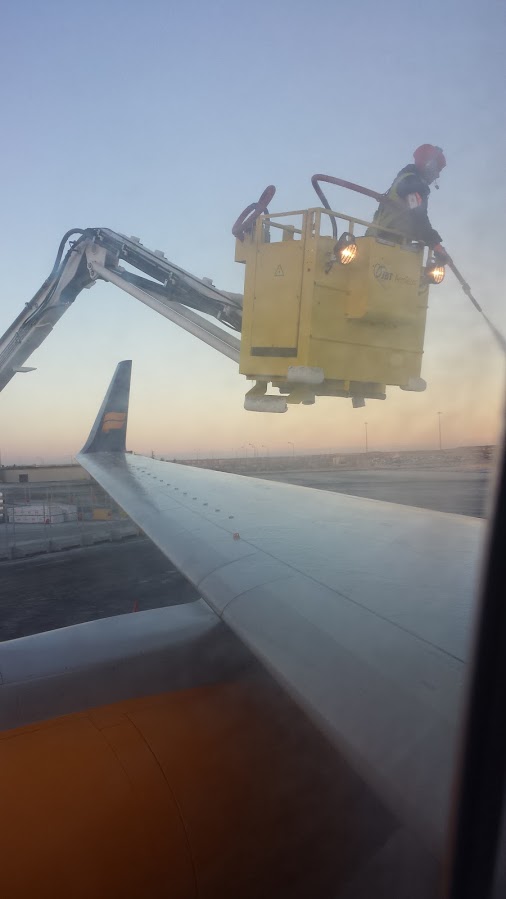 Once again, we fly over Greenland, but this time there is daylight, so we can get a glimpse of the steadily vanishing ice and snow below, and almost see the polar bears cavorting.

Icelandair is a fun airline to fly with.

One reason is that Oscar-worthy safety video. 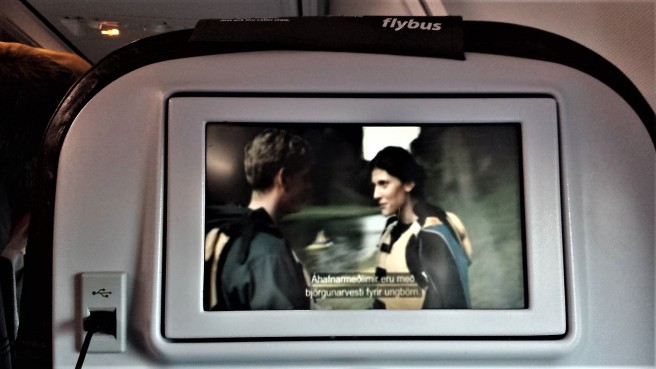 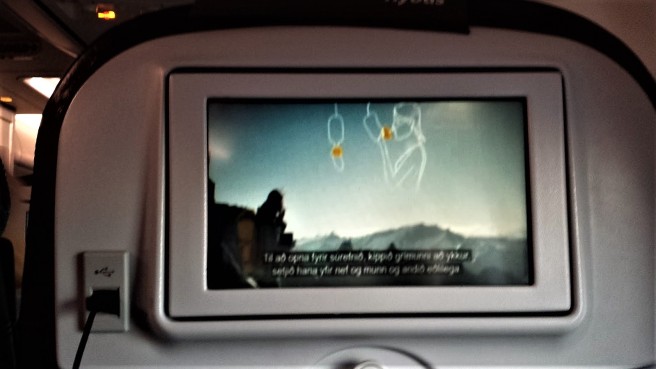 It’s a long flight, so I watch two Icelandic movies, which is something I don’t get a chance to do every day. One is a silly comedy about twenty-somethings working at a golf course. But the other is much meatier: a light-hearted but poignant family drama called “Homecoming”, the plot of which (though it has several surprise twists and turns) reminds me of Kimberly’s current pursuit of her blood relatives. Despite getting out of the gate a bit slowly, the film builds up to be very interesting and satisfying.

Well after dark, we make our descent into Washington D.C., a city where a great many people have made a descent.

When we disembark, we don’t do so into the terminal, but into a strange little futuristic pod on wheels straight out of Star Wars. It’s initially raised to the same level of the terminal, like a skyway, but once we’re all aboard, it sinks down to a lower level and tootles across the tarmac to another gate where, to our surprise, we have to endure another security checkpoint.

Presumably, that was the last one. And we’re pleased to see that Kimberly has made it back home with an exquisite little pair of scissors she purchased in Paris, way back at the beginning of the trip.

From here, it’s a rather brief hop to Atlanta, where this amazing odyssey all began. What a day it’s been. Thanks to the magic of jet travel and time zones, we started out this morning in Paris, made stops in Iceland and D.C., and landed in Atlanta before our airline coach turned into a pumpkin. And the allusion to Cinderella is altogether appropriate, since the past month itself has been an absolute fairy tale.

But all good things must end, and tomorrow it will be back to the “real” world. Where, we hear, the American media and a good chunk of the American public are taking seriously the presidential candidacy of a bigoted, incompetent, wildly delusional, petty, whiny, infantile, thoroughly corrupt, serial lying, narcissistic, self-serving, bullying, blowhard egomaniac buffoon with zero knowledge of history or government. Hmm… Is there any way we can just stay on the plane?

Atlanta, as it happens, has its own version of our beloved Eiffel Tower.

But it’s too late and too dark to pay it a visit tonight. With only a brief wait, we catch a bus that will take us the short distance to where our RV and trailer are stored. And it turns out to be the strangest bus ride we’ve ever taken — because everyone aboard is just so damn happy.

It’s almost midnight, and the bus is packed with people who’ve just gotten off work — jobs that entail dealing with the public, no less. You’d expect everyone to be tired and grumpy and sullen; but instead, they’re acting as if their team just won the Super Bowl. Everyone, including the driver, is African-American except us; and when someone makes a joke about us moving to the back of the bus, everyone who hears it cracks up, us included. That’s the kind of mood that prevails for the entire ride. We’ve ridden buses (and commuter trains) many, many times, at many times of day and night, under many circumstances, but we’ve never seen anything quite like this.

The bus deposits us near our storage facility, where we (meaning I) realize that the access code for the gate is written on a piece of paper which I apparently left on the table inside the RV. And the office, of course, is long closed — in fact, we had to make special arrangements even to get gate access at this hour. But I have a good memory, and I systematically start going through the possibilities until finally we are inside just before the witching hour strikes.

The RV and trailer are just as we left them and are not, as we feared, overrun with pests. Oh, and that burrito we left in the microwave a month ago, and have wondered about periodically in the interim? It’s only slightly moldy, and has not created a stench at all. Kids, don’t try this at home.

Now it’s off to park somewhere nearby where we can indulge in a good long sleep. Goodnight, Europe. We hope to see you again real soon.