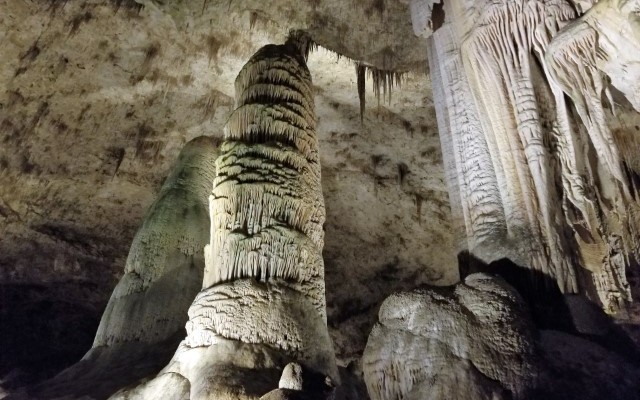 It was a chilly day in New Mexico with even a few snow flurries, but we didn’t mind because we were taking refuge with the bats hundreds of feet below the earth’s surface at Carlsbad Caverns. We spent a couple of hours making the big loop through all of the caverns that are open to the public, seeing some unbelievable stalagmites, stalactites and other speleothems (cave formations). Many of them have been given names like The Whale’s Mouth, because of what they resemble. Others are as yet unnamed, so you can come up with your own. (We claim the rights to Garfield, because one formation looked like the famous cartoon cat.)

You can also see a few remnants of the cave’s human history, including an old wooden staircase that was used by tourists about a century ago, and a rusted metal “rope” ladder dating from about the same time, which explorers used to explore a deep pit in what must have been a very nerve-wracking experience.

Fortunately, it’s a lot easier for us today. The Carlsbad Caverns tour is a great way to experience New Mexico, and the earth itself, at any time of year.