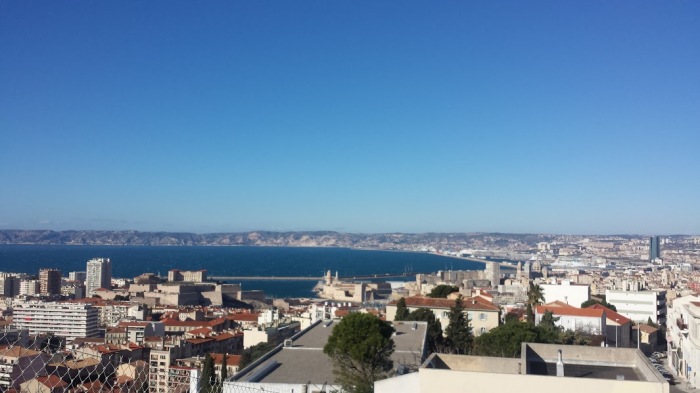 We don’t have high expectations for the second-largest city in France. We hear that it’s dirty and high-crime (though still lower crime than most major U.S. cities) and there isn’t really much there here. So it isn’t on our must-see list, but it does provide a convenient place to break up our long train ride to Italy.

So our train pulls into the station in Marseille at 5:58 AM, and the temperature is about as close to zero as the hour is to midnight. We won’t be able to meet our host until 11:00, so we have to find something to do in the meantime. One thing we already have planned: we’ve scouted online for a laundromat in the vicinity, so we can clean the few clothes we have.

European laundromats are rather different from their stateside cousins. Rather than insert your coins into the machine you’re using, you insert them into a central box where you select the number of your machine. (Laundromats also appear to be more expensive; washing and drying one load set us back the equivalent of about 7 bucks.) That part is easy enough to figure out, but the other instructions, with nary an English syllable in sight, have us scratching our heads for about 10 minutes until we finally reach an epiphany.

We have the place to ourselves, so it’s no problem to strip down to our skivvies underneath our coats and wash everything we possibly can. After two other customers join us later, getting dressed again is a bit more awkward, but we manage.

Still having plenty of time before our rendezvous, we begin walking toward the waterfront. It’s still dark and cold. As we come to a little park in the middle of a roundabout, we see a man approaching who is covered with blood from his face to his waist, probably ruining his brown patent leather jacket. The blood appears to be coming from a wound on his face, but we never learn exactly what happened. Fortunately, another man approaches on a motorcycle (it seems that these two might know each other) and pulls out his phone to call for help.

Down at the waterfront, we find a bench to sit on to have our breakfast. The dawn breaks, or at least stretches.

We continue strolling to find some place, any place, where can sit to get warm, get online, and maybe have our (meaning my) morning tea. But the only establishments we see are fancy hotels and restaurants. With one exception. We ultimately settle on (drum roll) a McDonald’s. Probably the first time we’ve patronized one in about 20 years.

After all too long a stint under the golden arches, we finally go to meet our host for the night. He lives in an older apartment building, and after he buzzes us up, we walk up a spiral staircase of 6 floors with no landings between floors, an ascent almost as strenuous as the one yesterday at Notre Dame.

Our host is a college student named Simon, who is pleasant and likeable but rather reserved. He’s in the middle of studying when he isn’t distracted by a game of soccer, which he loves. He is originally from Paris, but moved here to go to school, and says he likes it here better. It’s hard to see why unless he spends a lot of time at the beach — which, judging by his profile photo on Airbnb, just might be the case.

He shows us to our room, which is bright and comfy and is actually his room. We had been under the impression that Airbnb hosts were mostly empty nesters who owned their own houses, and had spare rooms to rent out. From what we’ve seen so far, they’re as likely to be twentysomethings who live in apartments and give up their own rooms to make a little extra cash.

After we’ve had some lunch, we go out again to do some exploring. At Simon’s recommendation, we hike up to the top of a hill to take a free tour of Notre Dame de la Garde. It will be our second Notre Dame to visit in as many days. But this one is much warmer, in more ways than one, than the more famous namesake in Paris. 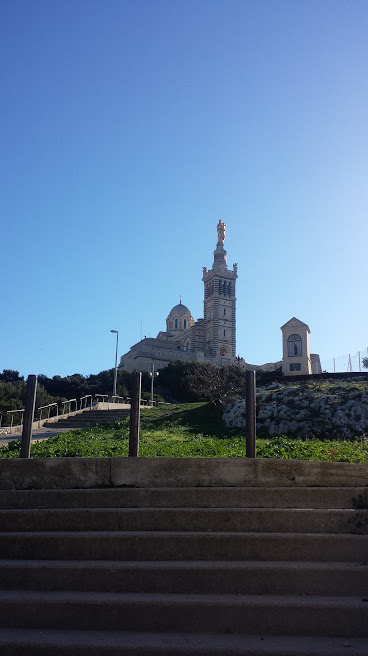 It’s also much newer, having been built in 1864 on the foundation of a medieval fortress. But it looks older than it is, thanks to its Byzantine architectural style, of which I am especially fond. 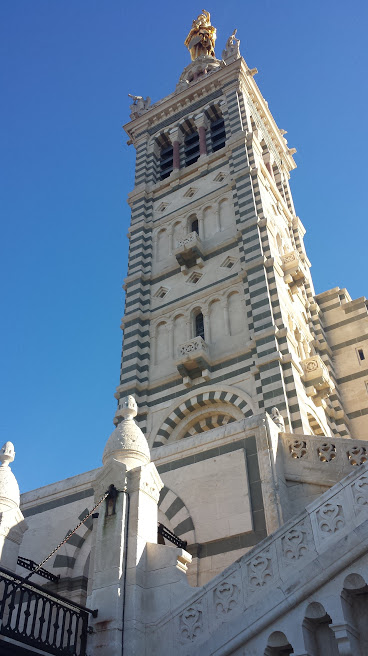 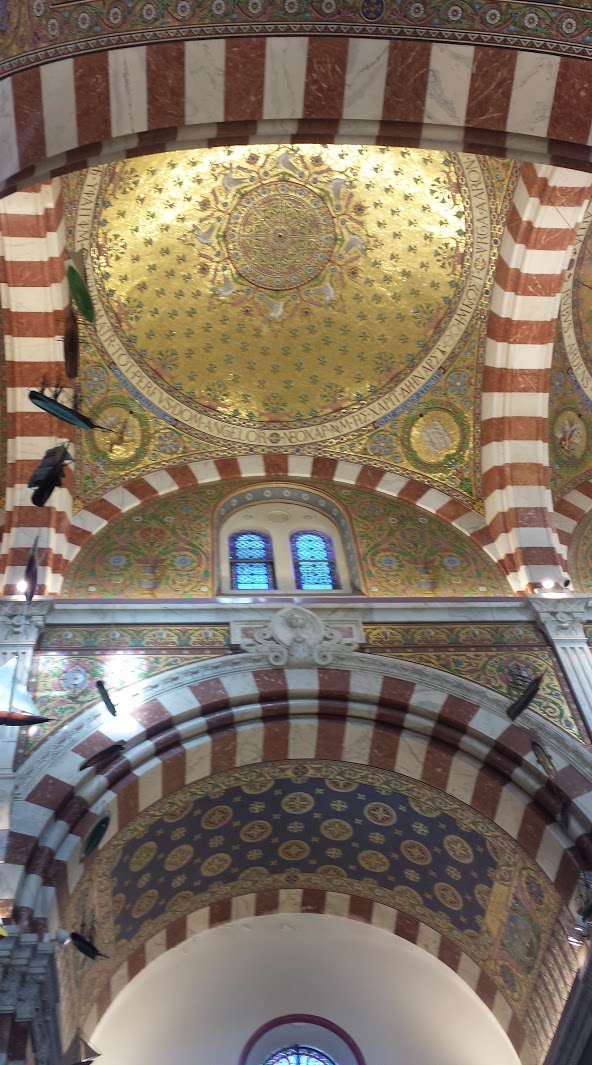 There are little mobiles hanging from the ceiling incorporating model ships — apparently a sort of good luck charm for sailors. 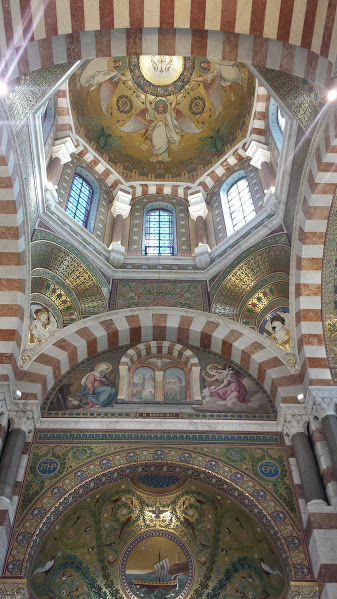 The hill on which the cathedral sits is a good place to get a panorama of the city, which, from what we’ve seen, looks more appealing from up here than it does at eye level.

Off to one side we notice a huge soccer stadium, which Simon probably goes to as often as time and budget will allow.

We head back down the hill and finish our walking tour of the waterfront.  We walk around Fort St. Jean, a 17th Century military installation. Walking up the hill to get a better look at the harbor, we spot two men swimming by the fort with no wetsuits on. It’s 40 frigging degrees, and they’re swimming as if they’re in a hot spring.

About a mile offshore is another fortress, about a century older: the Chateau d’If, which later was converted into a prison, after which it was immortalized in the novel The Count Of Monte Cristo. If we were spending more than a day here, we’d certainly consider splurging on the rather costly ferry to the island and tour of the prison. But this time we content ourselves with savoring the quaint and creepy charms of this French Alcatraz from a distance. 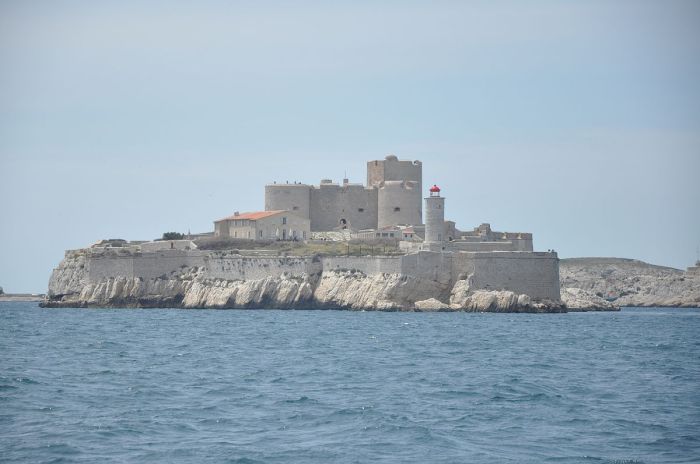 Up on a hill overlooking the port, we find an interesting piece of sculpture that looks somewhat like the skeleton of a dinosaur. It seems like a good place to make sculpture of ourselves. We’ve been practicing acro yoga quite a bit lately, so we enact one of our poses, to the admiration and awe of three teenage girls nearby.

Walking back to the apartment, we encounter a vending machine such as we don’t recall seeing on the streets back home.

Well, we didn’t have high expectations for Marseille, and it sort of didn’t not measure up to them. We don’t particularly recommend it as a tourist destination, but there are certainly worse places to stretch your legs or do laundry or stroll along a seaport in the middle of a long train ride.

Tomorrow it’s on to Pisa.